The Shark is a mutated shark and an enemy of Aquaman and Green Lantern.

The explosion of an experimental atomic pile bombarded a prowling tiger shark with radiation. Millions of years of evolution occurred in a matter of minutes.

The Shark now possessed incredible mental powers, including matter manipulation and powerful energy bolts. With his mind reading ability he absorbed vast knowledge from the people around him. He found he could project fear in anyone he chose. The Shark was still motivated by one driving force, to seek prey. He used his powers to make himself appear more human, and adopted the name "T.S. Smith" to stand for "Tiger Shark."

In a Coast City restaurant, the Shark devoured dozens of bloody steaks to feed his hunger. He started a fight with a local boxing champ, only to have the champ pass out from fear.

Ordinary men would be too easy for the advanced predator, so his mind sought out Hal Jordan. Also known as Green Lantern, Jordan was completely without fear. Before destroying his foe, the Shark vowed to inject fear into the test pilot.

Jordan was contacted by the Shark and learned everything about his newest foe. He was challenged to a fight to the death.

At Ferris Aircraft, Jordan recharged his power ring to discover the interior of the aircraft hanger had been turned yellow. The Shark had learned the ring's weakness from Jordan's mind. The Shark would not allow Green Lantern to hunt him.

The Shark revealed his plan to enclose Coast City in a forcefield, creating his private hunting preserve. He would go after Carol Ferris, Tom Kalmaku and other friends of Jordan. This did not have the desired effect of instilling fear in Green Lantern. Rather, the emerald warrior doubled his will power to overcome the Shark. It was then a simple matter of regressing the Shark to his original tiger shark form. The Shark lost his mental powers, and was apparently helpless. The sea creature was brought to the Coast City aquarium and placed under guard.

Karshon has super human strength, endurance, a set of claws, sharpened teeth, and enhanced sense of smell. He can breathe in water as well as on land, swim at up to 60 Miles per hour and fly by psyonically levitating himself. He also has a number of mental powers, such as the ability to instill fear in his victims, manipulate matter, project energy bolts and communicate telepathically.

The Shark later makes a few cameo appearences in the show Justice League Unlimited as a member of the Legion of Doom.

He later makes a cameo in the show Batman the Brave and the Bold in the episode "Night of Huntress" in attempt in escaping from Blackgate Prison.

Karshon in Batman: The Brave and the Bold. 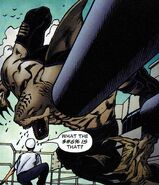 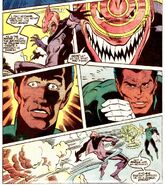 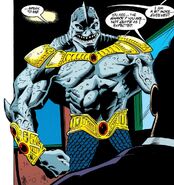 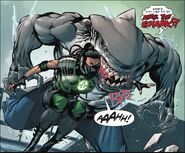 Retrieved from "https://villains.fandom.com/wiki/The_Shark?oldid=3487763"
Community content is available under CC-BY-SA unless otherwise noted.