Villains Wiki
Register
Don't have an account?
Sign In
Advertisement
in: Female, Siblings, Related to Hero,
and 36 more

Blind Kubo to strip him of his humanity (failed).

Karasu and Washi, better known together as The Sisters, are Kubo's wicked twin aunts and the secondary antagonists in the 2016 stop-motion film Kubo and the Two Strings. As such, The Sisters were also Satiaru's younger sisters and worked under their father, The Moon King, the movie's main antagonist.

They were both voiced by Rooney Mara in the English version, who also played Emily Taylor in Side Effects and Rina Kawaei in the Japanese version.

Both sisters wear wide straw hats with disturbing Noh masks covering their true faces. Under their feathery cape (which gave the illusion of possessing crow wings), they wore dark black body armour. They also have jet black hair that is tied into a ponytail. The only thing that distinguished one of them with another is their respective weapon of choice: One sister holds a katana and the other a chain scythe kusarigama), the former also wields a pipe in order to use her magic.

What made the Sisters such frightening adversaries that Kubo ever faced was both their ability to speak in unison or finished each others' sentences and psychopathic, tenacious, and fierce personalities they shared in common. Both Karasu and Washi were not just the textbook definition of a persistent stalker, but also cold, cruel, calculating, dark, creepy, and homicidal to the core that they take pleasure in ending anyone that is foolish enough to interfere with their resolution to catch Kubo, even innocent bystanders who don't know anything. The Sisters are shown to be quite sadistic as well, enjoying the suffering and sorrow of others and laughing uncontrollably when they saw how frightened Kubo was in their presence during their first confrontation. They hate and despise anything that is pure or light, preferring to embrace the darkness of night as an old friend.

Karasu and Washi are also vengeful and embittered killers. Like their father the Moon King, the Sisters used to look up on their sibling Satiaru, whom used to be the best assassins compared to them. When they found that Satiaru fall in love with Hanzo and married him, they're not surprisingly hurt with the betrayal so much that they eventually despised her and had no qualm in killing her. In their separated confrontation with the heroes that led to their deaths, they express their anger and pain as they tried to kill Kubo, Monkey (Satiaru's animated monkey amulet form) and Beetle (humanoid being trapped within beetle-like body whom later revealed to be Hanzo's cursed self).

Karasu and Washi, alongside Satiaru, were born as daughters of The Moon King, Raiden, and therefore ruled alongside him over his dark kingdom in Heaven. All three sisters had honed their skills and together became Heaven's most fearsome assassins. According to Karasu, in the past she had fought against creatures that could hold the Earth on their fingernail. Initially, The Sisters bore a great amount of respect towards their eldest sister, specifically do to her bravery and strength, but that soon changed after Satiaru abandoned her godhood to live on Earth. Fearing that humanity would try and overthrow him, The Moon King tasked all three of his daughters to bring him the magic armor that could kill him: The Sword Unbreakable, Breastplate Impenetrable and the Helmet Indestructible, which at the time were being guarded by the fierce Beetle Samurai Clan led by mighty warrior Beetle Hanzo. Satiaru arrived one night before The Sisters and fought Hanzo in a one-on-one sword fight. As it turned out both warriors were evenly matched, but instead of either one winning Hanzo had seemingly fallen in love with Satiaru, who in turn fell for him after seeing the warmth that came with being human. As a result, the two married and had a son, the titular Kubo. Enraged with her betrayal, The Sisters, along with The Moon King, chased after Satiaru, decimating the Beetle Clan Fortress and killing seemingly everyone samurai of the clan. And although they succeeded in removing baby Kubo's left eye, Satiaru manages to escape with the infant on a bout while Hanzo had been allegedly murdered. In truth, The Sisters twisted the samurai into a beetle-shaped humanoid and cursed him with amnesia.

Eleven whole years had passed since their sister's abandonment, but Karasu and Washi continued to search for Satiaru and her son, determined to remove Kubo's other eye so he could "ascend" to Heaven and join The Moon King's family. To that end, Satiaru and Kubo spent every night in a cave by the seaside so that The Moon King could not locate them.

In Kubo and the Two Strings

The Sisters found Kubo where he unknowingly stayed out of the night after an unsuccessful attempt to contact his supposedly deceased father. They sadistically intimidate him as they asked him to join them. Both sisters then conjure darkness in form of a mass of black smoke full of tentacles that tried to reach the boy, even goes so far to have conjured darkness destroyed and rammed everything that stood on their path. When Kubo was cornered, Satiaru interfered by dispelled the darkness away, before enchanted the crest on Kubo’s robe that sprouted wings that took the boy away, but not before asked him to find the suit of armor needed to defeat Moon King. Afterwards, the Sisters fought Satiaru and seemingly destroyed each other.

After realized that Kubo is searching for mystic armor needed to defeat Raiden, The Sisters immediately make haste for him. One of them, Karasu, fought Monkey as he and Beetle goes for the Armor. As they fight, the Karasu expresses their fury and disgust with their sister’s love toward Hanzo. In spite of her immense skills, she proved to be a match for the Monkey. The fight briefly interrupted by the Beetle whom returned just for fish that Kubo previously shot with an arrow. Karasu goes to attack Beetle, but Monkey interrupted by ensnaring her neck with her own kusarigama’s chain.

The battle destroyed much of the ship, and as Karasu dismissed love as a weakness, she prevented Monkey getting her hands on Unbreakable Sword, only for Monkey reach it just in time and then deliver a fatal blow on her, killing her by possibly cutting her face in half as her mask fell into the sea and left only one Sister remaining.

The last sister, Washi, showed up where she had the heroes on their mercy, and in disgust, revealed that Beetle was actually Hanzo’s cursed form that she and Moon King put on him for her love with his daughter. As she tried to take Kubo’s last eye, Kubo smacks her and makes the bottom half of her mask fall off, revealing that she has deathly pale skin. Monkey, whom has revealed to be Satiaru's incarnated form, attacks Washi. The fight ensued with Monkey who found herself overpowered by Washi and mortally wounded by her, only for Beetle to deliver a powerful blow on her. However, this did not stop Washi whom mortally wounded Beetle and goes after the heroes again. Before Washi delivered a fatal blow on Monkey, Kubo uses his powers to unleash a powerful mystic wave, killed her, leaving only her mask. 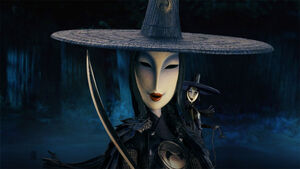