Commander of the Absymal Things and Skeleton Crew

Find new victims to add to his attire.

Save his Daughter.
Stop Elijah.

The Skin Taker (sometimes spelled The Skin-Taker) is a skeleton marionette, and an inhabitant of the Abysmal Kingdom, who was summoned to Candle Cove. He is known to roam around candlelit caves and seashores. He is the most prominent figure of Candle Cove and its associated lore, frequently serving as a source of nightmares.

The Skin Taker is very calm, but also sadistic. He does not acknowledge skinning his victims as cruel he thinks he is doing them a favor. The Skin Taker thinks being dead is like another version of being alive, as he speaks to the dead as if they were still alive. However, like many villains, he is abusive towards his henchmen. One notable incident involved him curb-stomping Horace into the body of a rat.

His construction is also of note. In addition to being a skeletal marionette, he also has the distinction of having glass eyes that are too big for the sockets. Naturally, he is also accompanied by his cape and hat constructed from the corpses of victims.

In his earliest appearances, The Skin Taker acts as the secondary antagonist, by tempting Percy to commit assault, battery or even murders or suicide. His most notable early appearance involves Janice and Percy entering a cave and finding him grinding his teeth. When asked by Janice why he does, he responds with the page quote, notably staring directly at the viewers as he says it.

He is known to be present in six episodes, but he may have been in more of the ones that were unaired. His scenes are generally lengthy and considered frightening. His signature songs, "Come, Come, Rip" and "One Year Closer", contain some ambiguous and dark themes. (Although the latter very obviously speaks of Janice being closer to death, and thus closer to becoming another victim.)

The Skin Taker is not defeated in every episode. He has managed to kill pirates from both tribulations and crafted (on-screen and off-screen depending on the episode) pieces of clothing from their skins. The most notable victim is the rival pirate Milo, who had assumed he could garner more power by working with the Skin-Taker, unaware of who was really in charge. This character is, by far, the most controversial part of the show.

Of course, in the original creepypasta, Candle Cove was revealed to be of dubious existence given how everyone who remembered it was actually watching static. However, this greatly emphasizes The Skin Taker's sinister qualities, as well as the rest of the show.

In other accounts that branch outside the series and create a sort of mythos for Candle Cove, The Skin Taker appears as a notable figure of malice and nightmares. His performer Michael Colon is noted to have endured a horrendous nightmare in which his son was murdered by The Skin Taker and had his face added to the skeleton's hat. Sadly, Colon's son Trevor was murdered for real, and the killer remained at large. In one narrative, "Candle Cove: Tales from the Laughingstock", Colon is interviewed by an unnamed writer attempting to gather information about the series for a book. Colon relates this nightmare and ultimately takes his own life when the nightmares return to him following the interview.

Assorted other narratives present The Skin Taker as a foreboding sign of what is to come. The protagonist of "Candle Cove: Day of the Dead" recalls how her son received a macabre statuette of The Skin Taker playing a piano not long before he was murdered by a man for playing the Candle Cove theme.

In 2016, Candle Cove was adapted by channel SyFy as the first six-episode season of a series called Channel Zero. Here, the Skin-Taker had two separate personas. In a pocket dimension, he was called Skin-Taker, and his default form was a baggy, decomposed humanoid who wore a bicorn hat and kept sticking nails into his head. He groaned and moved in a convoluted way. When he appeared on the TV as a vision to kids, he was called Jawbone, looked like a stereotypical skeleton pirate, with a classic bicorn hat, but wore his trademark human-skin cape. On the show, 'Jawbone' acted like a demented, highly strung maniac who was prone to fits of laughter, and he had a goofy voice. His catchphrase was tweaked, as he said 'I will have your hide' instead of 'to grind your skin.' 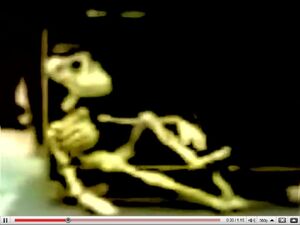 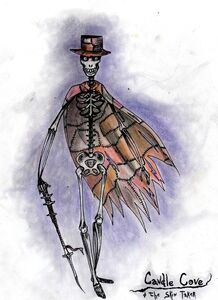 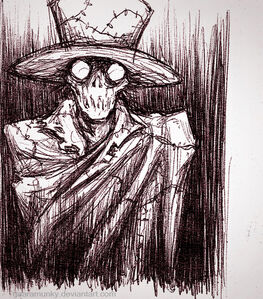 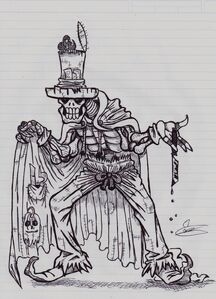 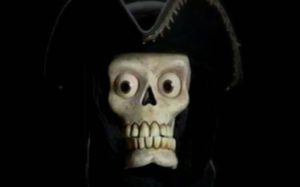 The Skin Taker, aka Jawbone, as he appeared in the Channel Zero take on Candle Cove. 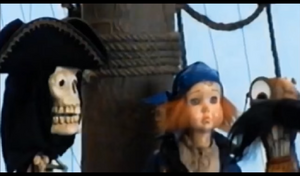 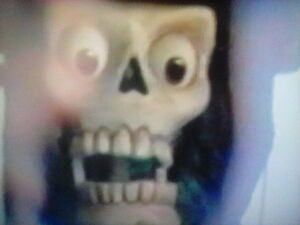 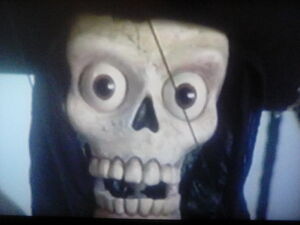 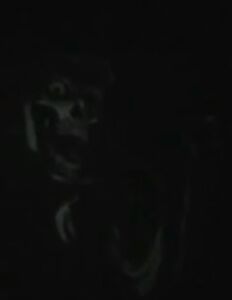