The Slaves of the Flame Undying

The Slaves of the Flame Undying

Egypt (dating back to pre-Roman Empire)

Within the areas of the Nile River

The Slaves of the Flame Undying are an Egyptian cult who revere the fire deity Cthugha and they are one of the many antagonistic groups in the Lovecraftian universe, particularly the Cthulhu Mythos genre by the late famed horror author H. P. Lovecraft. They first appeared in Bret Kramer's "Baggage Check" scenario for the "The Unbound Book" PDF magazine that contains a number of scenarios for Call of Cthulhu.

The cult dates back to pre-Roman Egypt where a secretive priesthood within the areas of the Nile River worshipped Cthugha under the name of Kathigu-Ra.

The worship of the cult and its god diminished under the reign of the Ptolemys and the cult disappeared from records altogether sometime during the 2nd century B.C. and in spite of this, the Slaves may continue on into the present day.

The high priestesses of the cult are able to divine and foretell events occurring far away by staring into a ceremonial brazier. 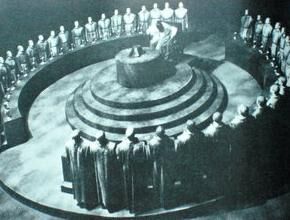 The Slaves of the Flame Undying. 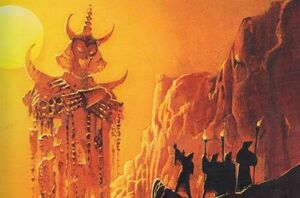 The Slaves of the Flame Undying stand before their god Kathigu-Ra (Cthugha). 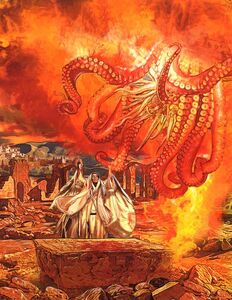 A priest of the Slave of the Flame Undying praised the power of Kathigu-Ra/Cthugha.