The Smash is one of the secondary antagonists of the mobile game Plants vs. Zombie Heroes. He is a Gargantuar Wrestler, who leads Beastly and Hearty classes.

Not much is known The Smash's past. However, in The Smash's introduction comic strips, he can be seen attempting to open a jar of brain, while being surrounded by the Peashooters and Green Shadow. He then used his strength to break it, which created a large crater and defeated all plants around him.

The Smash appeared in Battle for the Belt after defeated a Cactus, Green Shadow, Solar Flare, Wall-kight, and Grass Knuckles challenged him. They had a fight until Grass Knuckles defeated The Smash by launching Wall-knight at him. After that, the plant hero won the belt, with him and his Imp gambler unconscious.

In A Schooling at Zombie U, The Smash can be seen eating a book in Professor Brainstorm's classroom.

In Battle at the BBQ, after Super Brainz turned on the Plant signal, Green Shadow checked out and suddenly interrupt the BBQ party. The Smash, Impfinity, and Super Brainz had a battle against her until The Smash defeated Green Shadow by throwing her into Brain Freeze's jelly, which makes him sad.

The Smash returned in A Fight to the Finish Line to take part in a race against Grass Knuckles.

The Smash made his appearance in Everything's Coming Up Goats! while fighting Rose until she managed to goatify him.

In Mini-Golf Standoff, when Wall-knight interrupted the Golf game, The Smash, Brain Freeze, and Impfinity came to action. They tried to break his armor until Brain Freeze used a golf stick to defeat him.

The Smash appeared in Nightcap's introduction comic strips alongside Immorticia and Rustbolt to attack a group of plants, until Nightcap and his mushroom team to prevent them from doing so.

The Smash is a Gargantuan wrestler who can utilize his strength to beat every enemy who opposes him. His weakness is arrogance, as he cannot dodge Wall-Knight, who is striking at him. 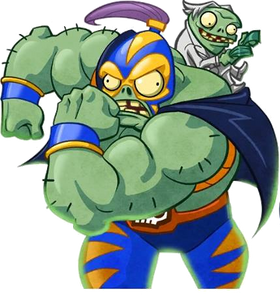 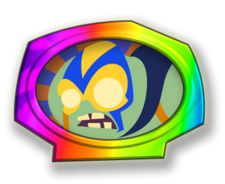 Slammin' Smackdown
Add a photo to this gallery

Retrieved from "https://villains.fandom.com/wiki/The_Smash?oldid=4200902"
Community content is available under CC-BY-SA unless otherwise noted.