Lure and eat its victims.

Possess it's victims and use them as hosts to further it's hunting skills (possibly).

The Smile Room, also known as "The Teeth", is an internet monster and urban legend created by the Canadian horror artist Trevor Henderson. The Smile Room got its name from the fake room that served as its disguise in its first sighting. The "door", in general however, actually leads to a humanlike "mouth" that has sharp crooked teeth.

The story of the Smile Room started on July 27, 2006, when three teenage friends found an amusement complex called Neb’s Fun World in Oshawa, Ontario in Canada. Two of them broke into it, while the third waited for them outside. The complex had entertaining parts in it such as a bowling area, arcade area and a jungle gym. The third teenager waited for them for hours, without any signs of them coming back, until he decided to enter the complex and find them.

The teenager managed to search everything inside of the complex, all of the fun areas, but there were no signs of the two others. He managed to find one of his missing friends' cellphone on the ground. When he looked at the phone, he was in shock, finding a photo of a monstrous anomaly which manifested itself in the back rooms of the complex. It appeared to be a gigantic human-looking vertical mouth with crooked teeth that manifested in an open doorway, with the words “The Smile Room” written above the door. The authorities got involved after seeing the photo and an investigation was started to find the missing teenagers.

The investigation was a failure, as when they got to the location of the anomaly, they found nothing. Instead, they found a plain brick-wall, without any doors or signs. The mystery of the missing teenagers and the cryptid were kept as a secret for a very long time. Everything changed however, on August 15, 2018, when Trevor Henderson showcased the story and revealed an image of the cryptid as a part of his found-footage series where Siren Head, Long Horse and other monsters are featured as well. Trevor also gave it the nickname "The Smile Room", referring to the fake room that housed the entity.

Two months later, Trevor Henderson revealed another photo of the Smile Room on his Instagram account, showing it squeezed at the top of a flight of stairs with several short tendrils of the mouth’s gums sticking out, which made people theorize what the mysterious predator could possibly be. On March 26, 2020, Trevor Henderson released a photo of a humanoid creature who had the same teeth as the Smile Room running down its body, calling it the “Smile Room Host”. This photo seemingly implies that the Smile Room creature has the ability to infect victims and use them as hosts to further its mysterious goals.

The Smile Room is not just a typical room, instead, it is a sentient entity which has the ability to manifest in multiple locations. Trevor states that it is an entity that is somehow capable of manifesting as a fake room in a building, using this technique to catch its victims. After a certain time, it moves to a different location, which explains the mysterious disappearance of the “Smile Room” in Neb’s Fun World. It is unknown where the victims go after being consumed by the Smile Room.

The fact that the recovered phone had a picture of the Smile Room from afar even though it belonged to one of the Smile Room’s victims has led to the theory that its mouth has a tongue-like appendage to pull victims in much like the ones inside the sirens of the infamous Siren Head. 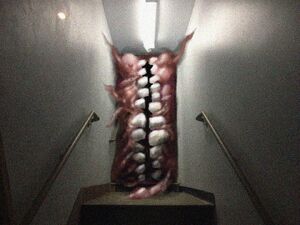 The Smile Room on the top of a staircase with the creature's gums seen stretching out like tentacles. 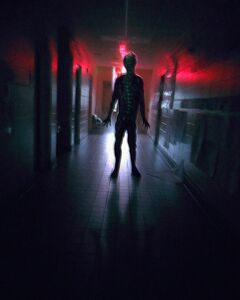 The victim that the Smile Room infected and later used as a host. 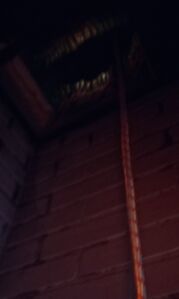 “Recovered image from a discarded cell phone currently in police evidence, held due to its connection to a missing teenager. This has been kept from the media, but the recovered items were covered in a clear organic material not unlike saliva.” 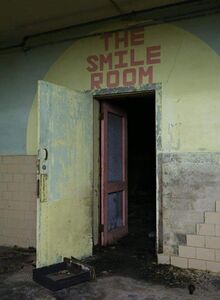 Smile room without mouth
Add a photo to this gallery 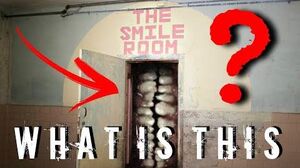 Investigating The Smile Room
Add a photo to this gallery

Retrieved from "https://villains.fandom.com/wiki/The_Smile_Room?oldid=4375544"
Community content is available under CC-BY-SA unless otherwise noted.