The Smith House (kicked out)

Thrill-Seeking Liars
The Smiths are minor antagonists in The Powerpuff Girls, only appearing in two episodes "Supper Villain", and "Just Desserts". They are the next door neighbors of The Powerpuff Girls, and they all hold some kind of ire toward the girls for their own various reasons.

In "Supper Villain", family patriarch, Harold Smith was depressed with the monotonous repetition of his day-to-day life, and it didn't help to know that his next door neighbors were The Utonium Family, a family of four, that was far happier than his, because of their thrilling, action-packed adventures, that they got the luxury of living every single day. Quietly, Harold had always awaited the demise of The Powerpuff Girls, and would always celebrate in silence, over their occasional misfortunes. In the mean time, Harold spent his private time, working on his super villain costume, preparing for the day, he would one day emerge from the shadows, reveal his true dark form, and defeat The Powerpuff Girls.

After a three day hostage situation, involving Mojo Jojo holding The Mayor captive, Harold's wife, Mary Anne, invited The Utonium Family over to their house, much to the internalized horror of Harold. Harold's family happily talked with their guests, while Harold tried desperately to hold it in, just for the one evening. However, he simply couldn't. Harold snapped and went into his villain form, shocking the rest of his family and The Utonium Family, and stopping their peaceful evening, dead in it's tracks. The tone sharply went dark, as Harold threatened The Powerpuff Girls to use his ray gun to blow The Professor's head off. The Powerpuff Girls were quick to spring into action, and save The Professor, but just before the fight could begin, Maryanne yielded them, with an angered scream for them to "STOP!"

Maryanne ranted about how she wanted nothing more than a perfect evening, and demanded that everybody, both her own family and The Powerpuff Girls to seize with the violence, and enjoy a nice dinner with her, with the promise that they could get right back to their fight, afterwards. A long, awkward, intense, and highly suspenseful dinner took place, with The Powerpuff Girls and Harold rushing to devour their food, with Professor Utonium nervously stalling and taking as much time as humanly possible, to avoid undergoing the inevitable fight, wherein he was sure he would die. Meanwhile, Maryanne happily ate her dinner, acting as though nothing was happening. The kids also had interesting reactions during the dinner. Harold's son, Bud, was proud of his dad, for finally doing something cool, and Harold's daughter, Julie, made random comments about playing jacks, childishly ignorant to the magnitude of the situation.

At the end of the dinner, Professor Utonium took his sweet time, eating the last pea on his plate, but just before any action could start, Maryanne brought out dessert. With the food for dessert being cream pies, it took only seconds for the suspenseful situation to turn into a food fight, between Harold and The Powerpuff Girls. Bud and Julie took part in the fun too. With everyone getting pied in the face, Maryanne was furious, as she considered this to have ruined the dinner. Just then, the police busted in, having apparently received some kind of phone call, possibly from an outsider, making a noise complaint, and arrested Harold Smith. As Harold was taken to jail, Maryanne watched in anger, as The Utonium Family went home safely, and vowed revenge on them for what they did. Not for getting her husband arrested for a year, but for ruining her dinner. 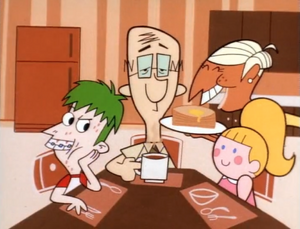 The Smiths, before becoming evil. 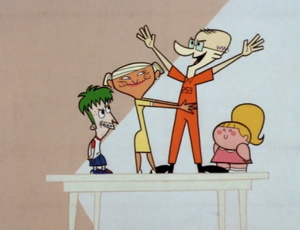 The Smith family unites as a team. 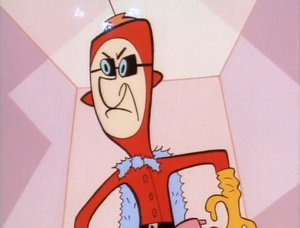 Harold reveals his true self. 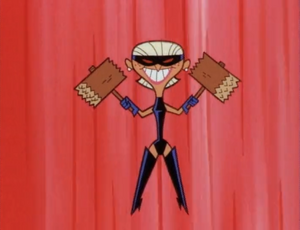 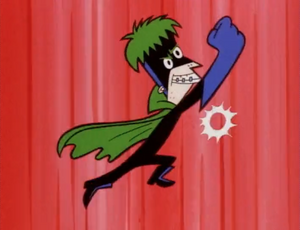 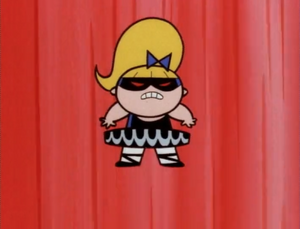 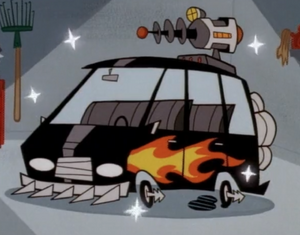 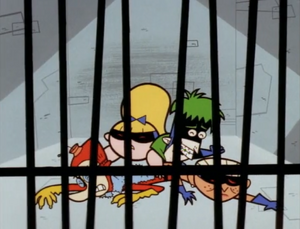 The Smiths in jail.
Add a photo to this gallery

Retrieved from "https://villains.fandom.com/wiki/The_Smiths?oldid=4102272"
Community content is available under CC-BY-SA unless otherwise noted.