King's Quest I: Quest for the Crown

Former member of the Magician's Guild

Sorcerer
The Sorcerer as he called himself, is a corrupt nameless spellcaster that is one of the minor villains in the adventure video game King's Quest I: Quest for the Crown. He is a sorcerer that will not kill Graham but will paralyze him with his magic. He also calls himself "The Enchanter" and "The Wizard". He was once a former member of a massive organized society of spellcasters called the Magician's Guild.

The Sorcerer was claimed to have cast a spell on King Edward's wife to allow her to give birth to a child. He requested the Magic Mirror in return for providing the king's wife with a child. He did not keep his word and Daventry suffered greatly without the mirror. He later hid the mirror with a dragon in a cave.

The Sorcerer cannot be defeated or killed in the game, so Graham must run away from him. The Sorcerer will paralyze Graham with his magic if he touches him. The spell only lasts for a few minutes and then wears of.

Graham thought that the Enchanter he encountered in Kolyma might have been the same individual. 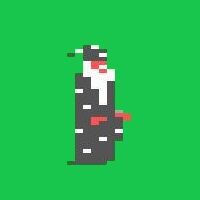