Speaking to the rat.
Being with the Sorceress.

He was voiced by Tim Curry, who also played Hexxus in 20th Century Fox's FernGully: The Last Rainforest, Ben Ravencroft in Scooby-Doo and the Witch's Ghost, Big Bayou in the Courage the Cowardly Dog series, Belial in The Legend of Atlantis by Golden Films, Evil Manta in Disney's The Little Mermaid animated series, Maestro Forte in Disney's Beauty and the Beast: The Enchanted Christmas, Kilokahn in Superhuman Samurai Sybersquad, Drake in Don Bluth's The Pebble and the Penguin by MGM, Dr. Frank-N-Furter in The Rocky Picture Horror Show, Pennywise/IT in Stephen King's IT and Darth Sidious in Clone Wars; then by the late Ben Cross in season 2, who also played Prince Malagant in First Knight.

As revealed in "Julian's Birthday Surprise", in ancient times (specifically over 800 years ago) the man who became the Sorcerer was turned out a poor and lowly peddler. One day, this peddler found one of the Chaos Pearls inside the pond while wandering, and, out of curiosity, took it with him. However, as he did, dark powers within the Pearl were eventually unleashed and corrupted him. Weak willed and tempted by the power in front of him, he allowed himself to be consumed by the darkness, thus the Sorcerer was born and the man he used to be was destroyed.

How this happened (judging from how Randy successfully exorcised Julian from one of the orb's influence by having the manifestation of Julian's dark side and the orb banished to the Land of Shadows) was shown that the power within the Chaos Pearl that corrupted the peddler magically bonded with the peddler's darker side while at the same time, the process also causes his body corrupted to the point that his appearance became reminiscent with human-lizard hybrid. Once the corruption process is completed, the Sorcerer proceed to extract his good side of his soul from his already corrupted soul and banish it to the Land of the Shadows.

Afterwards, the Sorcerer hunted down and gathered more Chaos Pearls to increases his power further. While terrorizing and corrupting unfortunate people into monsters, he met and join forces with the Sorceress and together tried to conquer the world with their almighty magical powers. The Ninja at the time battled him to a stalemate, as he was too powerful to destroyed. This prompt him to imprison the Sorcerer deep underground after banishing the Sorceress, where the location would eventually be built into a school Randy attended several thousand years later.

From there, he plots his escape by using his infamous dark powers called Stank. This power manifests as fog (often green ones) that enable him to manipulate the vulnerable victims, possessing both victims and what they hold dearest (anything that involved with suffered breakdown that made them vulnerable with stank), and using this to turn them into his puppets, as well as altering their physical forms into those of monsters. He then proceed to feeds of both negative emotions and chaos from his creations cause. He did it not only to fuel his power further, as when induced chaos intensified to a certain point, his powers will amplifies several times until he both strong enough to escape from his prison and enslave the world. He is the Ninja's greatest opponent aside Sorceress, as Ninja since then has to prevent his escape. In the modern day world, he has made an alliance with other villains, started from the billionaire philanthropist Hannibal McFist.

Despite their effort to fix the present successful, Randy and Howard also caused four of the Sorcerer's Chaos Pearls scattered, enabling the Sorcerer to use his scattered Pearls to causes chaos outside the school as well as bring more villains to his side, first starting Catfish Booray.

In Season Two, he still attempt to liberate himself by stanking everyone in regular basis until he briefly make an alliance with Evil Julian. Unfortunately, Evil Julian, whom wanted power for himself, betrayed him by draining the power of the Sorcerer's own remaining Chaos Pearls that he brought within his prison. As Evil Julian is too powerful to be dealed with, Randy, whom previously freed his human self in the Land of Shadows, resorts to make a short alliance with the Sorcerer. Once depowered Evil Julian, the Sorcerer turned against Randy and conjured a sword out of stank. Randy briefly gained an upper hand in the battle, only for The Sorcerer later break his sword. Before he had a chance to delivered a final blow, Howard and Julian fell onto him, where Julian's presence caused Evil Julian unwillingly merges back into the latter's psyche. With the combined effort with Howard, Randy defeats The Sorcerer by took his pearls away and tossed it into his prison and locked it.

As the Sorcerer laments over his defeat, his human self, who was previously freed by Randy, returned to Earth and comfort him. They later merged into a singular entity where they were initially. With his psyche restored, the peddler then thanked Randy before disappeared into glowing light, finally died in peace as their soul goes the afterlife.

The Sorcerer is a dangerous opponent, ruthless, greedy and power hungry. He will also stop at nothing to achieve his goals. He feeds off negative emotions, such as despair, fear, hate, humiliation and anger, and uses them both to manipulate others into becoming his pawns and fuel his powers thanks to his Chaos Pearls. He is highly sadistic, longing for suffering and terror to occur. However he mostly appears sophisticated and somewhat polite, this facade is not strong however, and he is also quick to anger, and will punish any who fail him. It also appears that in the 800 years he's been imprisoned he has seemingly gone insane, as he spends much of his time talking to a Rat, though it could just be he's so lonely.

However, he also has a romantic nature behind his hideous personality, as he fell in love with the Sorceress. Since both has many similarities in common, they had a romantic relationship as they brought chaos together. Unfortunately, they were separated when the Sorceress was banished to the Land of Shadows during the battle against First Ninja. He was saddened by her loss, and felt happy with her return 800 years later. 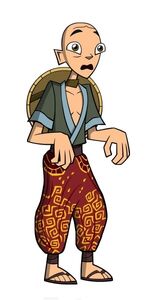 The Sorcerer in the past 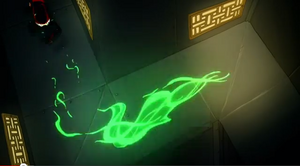 Sorcerer's Stank, his main power in the series.

The Sorcerer's Evil Laugh, with visage resembling that of a lizard 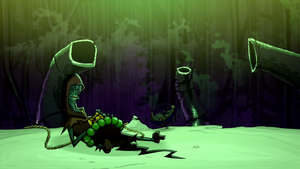 The Sorcerer and the Rat taking a nap 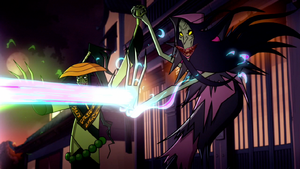 The Sorcerer and the Sorceress holding hands with chaos 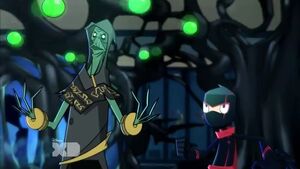 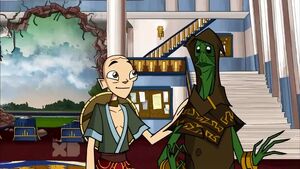 Sorcerer comforted by the Peddler, the manifestation of his remaining humanity that he previously tossed away 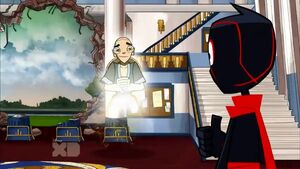 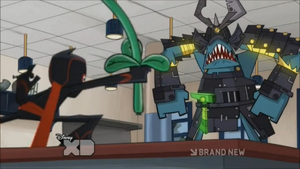 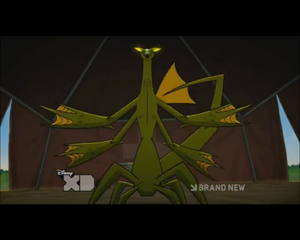 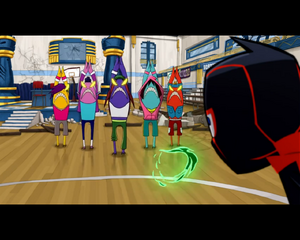 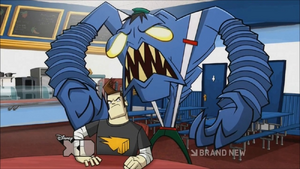 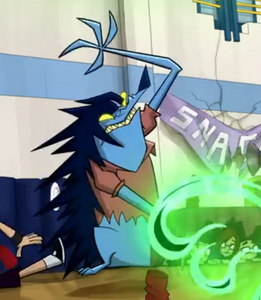 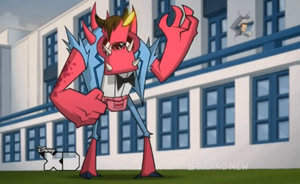 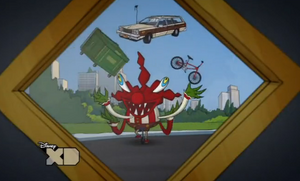 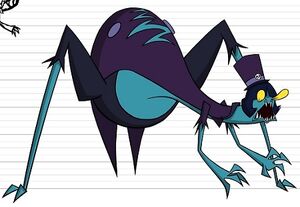 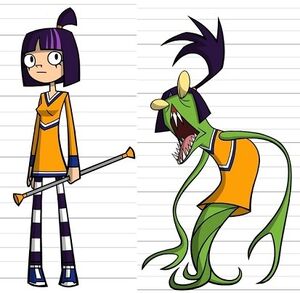 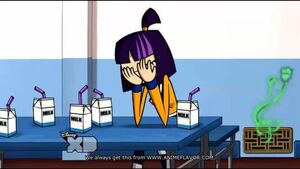 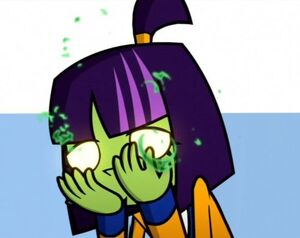 Upon the stank exposure, the process began where her skin became green, while her eyes would glow in yellow before popping out like crabs', just like other stanked victims. 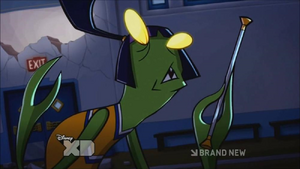