Ruler of the Forgotten World
Queen of the Rhynocs
Tyrant

Controlling all of the Forgotten Worlds.

The Sorceress, also known as the "Queen of the Forgotten Worlds", is a sinister dinosaur-like witch who rules the long-lost Forgotten Worlds as its queen, and she is the main antagonist of the third Spyro the Dragon videogame Spyro: Year of the Dragon. She proves to be one of Spyro's most powerful and wicked foes ever faced. The Sorceress is the ruler of the Forgotten Realms (the Forgotten Worlds) and queen of the Rhynocs, she looks a bit like a dinosaur mixed with a hippopotamus wearing a white ruff collar around her neck, as well as a tall golden jeweled crown and a gold, horned necklace with a magenta opal gem. She is at least 1,000 years old thanks to her own magic.

In 2000, she was voiced by Flo Di Re, who also voiced the Vie de Marli's Protectorate clan priestess and Lucia's adopted mother Matier in Devil May Cry 2, in the original game. In 2018 later on, she is voiced by Misty Lee in Spyro Reignited Trilogy.

The Sorceress is bad-tempered, vile, ungrateful, and loves to bully her servant/apprentice Bianca. A typical dictator who sends her minions to do her dirty work before she can do it herself in the end, the Sorceress is a malicious queen and a power-hungry individual. She also had no qualms about murdering children, as shown when she revealed the real reason she stole all the dragon eggs, making her extremely dark as far as Spyro villains go.

Long ago, the Sorceress and one of the Elder Dragons had a bad argument, and so she foolishly used her sorcery to banish him and the rest of his kind to the other side of the world far outside their former homeland. She had no idea at the time that the dragons themselves were the very source of the magic in the former Dragon Kingdom, including her own magic as well. And so everything and everyone in the newly named Forgotten Worlds ended up paying the price by having their magical powers slowly draining away within each passing year. This was especially hazardous for the Sorceress, who needed magic in order to stay alive.

In order to restore the depleting magic, the Sorceress ordered her apprentice, Bianca and several Rhynocs to invade the Dragon Worlds and steal all of their eggs. She then had her minions hide the eggs all across the Forgotten Worlds and deal with anyone who tries to take them back. For malicious reasons, the Sorceress also allowed the Rhynocs to rampage across the land, terrorizing its inhabitants and imprisoning anyone that should dare to resist. She even captured certain individuals who have proven troublesome, such as Sheila the Kangaroo, Sgt. Byrd, Bentley the Yeti, and Agent 9. Then she employed the greedy bear, Moneybags in keeping guard over them.

When she learned that Spyro and his friends, Hunter and Sparx had arrived to take the eggs back, she ordered Bianca to get rid of them. After she had failed to scare them off, the Sorceress gave her a spellbook that would allow her to create a monster to eliminate Spyro. Unfortunately, Bianca's creature, Buzz failed to defeat the dragon, causing the Sorceress to lose faith in her apprentice and take matters into her own hands by creating Spike. After that one was defeated too and Spyro continued to collect eggs, she finally becomes fed up and declared she would create the most powerful monster of all and have it kill all the dragons, including the newborns. When Bianca questions this, the Sorceress reveals she had no intention of letting the dragons live; she only wanted their wings so she could create a spell that would enable her to live forever (likely this meant that her magic would continue to exist while all other magics in the land faded away). Finally seeing her teacher for the monster she is, Bianca leaves in disgust and the Sorceress vows to deal with her after Spyro. And so she creates the insidious Scorch, but he is defeated as well.

After collecting enough eggs, Spyro was finally able to face the tyrannical Sorceress herself, who was immune to his regular attacks. But thanks to some powerful munitions provided by Agent 9, the young dragon was able to hurt the Sorceress, and seemingly killed her when she fell into the lava moat of her own arena, revealing the 147th egg (which was wedged in her scepter) and left.

But the wicked queen escapes from the lava within her castle arena and takes refuge in the Super Bonus Round, a secret castle in the high peaks of a snowy island where she hid a large stash of all of the treasure in the Forgotten Worlds. But Spyro finds her again in a hover platform fight and sends her flying into pink acid, killing her for good.

One year after her defeat, a balloon in the shape of the Sorceress appeared in the party where the baby dragons get their dragonflies. The Sorceress balloon scared Hunter, but Spyro explained that it is just a float, and called Hunter a "scaredy cat".

The Sorceress can conjure magic spells, one of them notable to turn any normal creature into a ferocious monster. Using her royal golden wand, presumably provided by the magic of a dragon egg attached to her sceptre, she can conjure fireballs and launch a large array of electrical energy spheres, as well as release an electrical discharge from her wand to attack at close-range. can also create a temporary green magic aura as a shield if her opponents gets too close to her.

Her most infamous ability is her own self-longevity. She was able to use her magic to keep herself alive for a thousand years, and even survive falling in a pit of lava the first time, but was unable to revive herself after falling into a pond of acid. 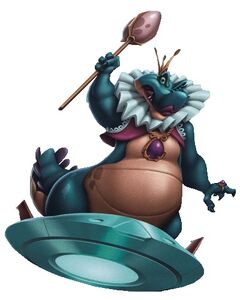 The Sorceress as seen in Spyro Reignited Trilogy. 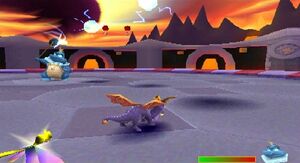 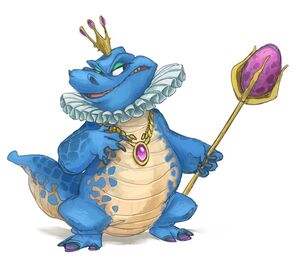 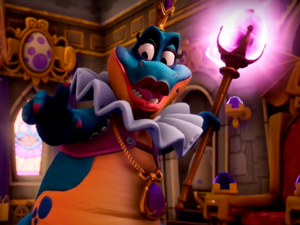 The Sorceress in Spyro Reignited Trilogy. 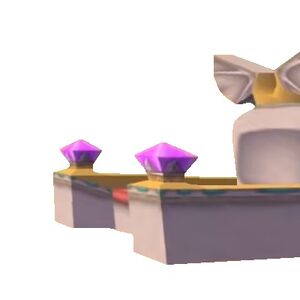 The Sorceress' throne from Spyro: Year of the Dragon. 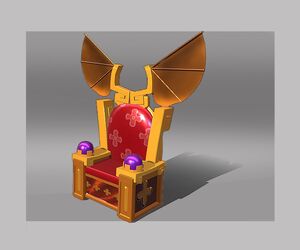 The Sorceress' royal throne from Spyro Reignited Trilogy.
Add a photo to this gallery

Retrieved from "https://villains.fandom.com/wiki/The_Sorceress_(Spyro)?oldid=3485259"
Community content is available under CC-BY-SA unless otherwise noted.