The Sorceress (The Little Mermaid)

The Sorceress (also called "The Lady in the Cave") is a mysterious, evil sorceress in the form of a disembodied head and a minor villainess in The Little Mermaid TV series. She is the main antagonist of the series' 11th episode "Red".

She was voiced by Linda Gray.

She was cursed to be trapped in a cave by King Triton himself many years ago, and conspires with Glowfish to get the trident and set herself free. She did so using the Youth Stone, a magic crystal that will make anyone turned into a young child via the sound of a magic flute which activates the stone's spell.

Ariel and her friends at a party and she turns the music up. Not sure, how that exactly works underwater but ah well. Triton comes down and check on the party and Triton and Ariel share a dance. It's a rather touching moment but at the same time, Triton is starting to feel his age as seen here.

Ariel feels bad for her father and wants to help him feel youthful. This is where Triton's new assistant and one off character, Glowfish comes in. Glowfish supposedly supposed to be looking over the treasure but he actually wants it for himself and we find out that he is working for an evil witch in the form of a large head of a dark-blue woman with large plum hair called the Sorceress who was trapped by Triton, and wants his trident in her attempt to escape the cave she is trapped in and have her revenge. She gives Glowfish a spell that will make Triton feel more youthful. And this is where the transformation comes into play.

And so, the magic transformed Triton into a young boy by his old nickname Red, who is quite a mischievous little tyke. Always getting into trouble explaining where Ariel got that from. And from there, wee see Ariel deal with the responsibility of taking care of a young child and how frustrated she gets.

And later on, Glowfish takes them to see the Sorceress, who lies that she can reverse the spell but we find out that it was temporary and it was stopped and then Triton locked the Sorceress back in the cave, where she had been kept, when he first locked her away. Triton remembered who she is and regained his trident back, thus keeping the Sorceress in her cavernous prison forever. 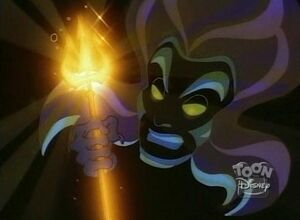 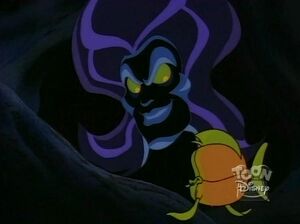 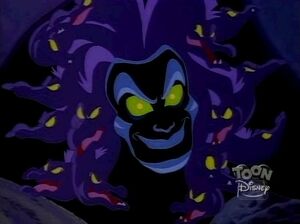