The Sorceror is an antagonist from Romancing SaGa 2.

The Sorceror is a member of a lost culture of magical people with longer lifespan called the "Ancients", who sought to learn all secrets of magic. For this end, he moved to the Comroon Island, where he built a personal tower to keep with his studies. The salamanders who lived in the town of Zemio were extremely suspicious of him, however, as they saw him sneaking on their library and taking some of their stone slabs.

When the player first arrives at the island, the locals from the town of Tsukijima will tell about an impending eruption of Mt. Comroon, a volcano located in the middle of the island, and ask the Emperor to seek the help of the Sorceror. Upon meeting him, he will give the Emperor an Ice Seed, which allows stopping the volcano's eruption by hardening the lava on the caldera. After the eruption is prevented the Sorceror thanks the Emperor before returning to his tower.

Many centuries later, the current Emperor receives word that the Volcano is about to explode, threatening to decimate the entire island and it's inhabitants, so he goes to the island to investigate. Upon talking to the Salamander elder in Zemio, he warns that the volcano will explode anytime soon, asking him to evacuate Tsukijima fast. after the town is evacuated, the Emperor returns to the salamander elder, who tells they don't want to evacuate since they're one with the volcano, but gives him a hammer with which to beak the rock blocking the lava flow. 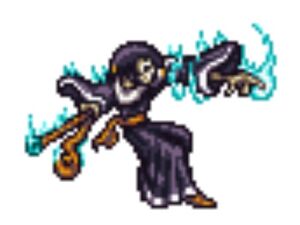 The Doctor
Add a photo to this gallery

Retrieved from "https://villains.fandom.com/wiki/The_Sorceror?oldid=3530927"
Community content is available under CC-BY-SA unless otherwise noted.