To destroy all planets.

The Source is the main villain in the Teen Titans episode "Employee of the Month". It's an evil alien tofu creature who was responsible for kidnapping Earth's cows. At first, The Source had a robotic voice, but when he revealed himself, he spoke in a high-pitched voice.

The Source was the leader of an alien task force which destroyed planets as it was there way. The Source came to Earth to collect power sources for their technology - which happened to be plain live cows. In order to coordinate its activities, it disguised its mothership as a newly founded fast-food restaurant, Mega Meaty Meat. From there, it sent out collector ships to collect cows from the outlying farms and created an entity from its own substance named Bob, who posed as the restaurant's manager to maintain their cover. After having collected enough cows, the Source intended to use a super weapon called the Destruct-o-tron to destroy the Earth for good measure as well. To complete its disguise, the Source used its own body substance as a "nutritious meat-free" replacement for the scarce-growing meat.

The farm raids soon called the Teen Titans upon the scene, but each time they apprehended a collector vessel, it managed to give them the slip. At the same time, Beast Boy desired to improve his mobility by getting himself his dream vehicle: a moped. He tried his hands at various jobs, but the only offer still left for him was working at the Meaty Meat restaurant - a horror for a sworn vegan. Nevertheless, Beast Boy was quickly swayed when Bob offered him a special price: his very own dream moped, to be granted to the employee of the month.

Finally, Beast Boy discovered the restaurant's secret and learned of the Source's existence. In order to stop its plans, he kidnapped the Source and started interrogating it; while the Source would initially not reveal information on its own volition, Beast Boy managed to persuade it by threatening to eat it for lunch. Subsequently, Beast Boy singlehandedly succeeded in thwarting the alien scheme, but his efforts were somewhat nullified when his over-stressed new Moped collapsed into a scrap pile and the Source was inadvertently consumed by a hungry Cyborg.

The Source was also seen joining the Brotherhood of Evil, but didn't actually fight with them. 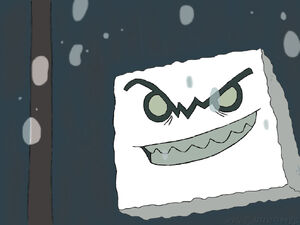 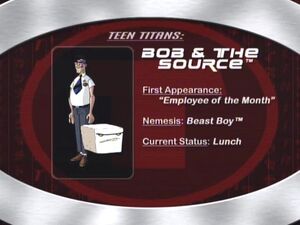