The Spirit of Dark and Lonely Water

Spirit of Dark and Lonely Water

Personification of the deadly properties of water

Lesser aspect of Death (by extension)

Luring the unwary to their demise.

Kill those who stray too close to forbidden waters.

The Spirit of Dark and Lonely Water is the symbolic villain of a PSA campaign in the 70s. His role is to personify the dangers of water and reckless behavior by children that often leds to accidents and deaths.

He was voiced by the late Donald Pleasence.

The Spirit of Dark and Lonely Water is a sinister, cold, emotionless, remorseless and diabolical being who lives up to his reputation as embodiment of dangerous properties of water and completely committed to maintain his said reputation. For that, he is determined to lure reckless and unwary people to their death in large bodies of water in every opportunity he can get. Unfortunately, those who proved themselves sensible and cautious enough to evade, if not outright overcome dangers of water as well as helping others to do the same are immune to his charm, let along he has power over them.

Befitting to his nature, The Spirit of Dark and Lonely Water is depicted as a humanoid figure clad in dark robe resembling those of a stereotypical Grim Reaper and always appears in large bodies of water.

In the context of the PSA campaign he featured in, he has sentience and seeks to lure all children he comes across to their death, having power over "show offs, fools and unwary" but being powerless against "sensible children".

As a symbolic personification of evil, he is similar to Satan and he is immortal, existing for as long as people do not obey rules around water or endanger themselves.

Throughout the narration he murders children and is in the process of watching his final victim drown when a group of children come to rescue the boy, the demon knows they are "sensible" and is forced to retreat as they succeed in saving the boy but the demon ends by warning the audience that he would be back (as is his nature as an immortal aspect of life). 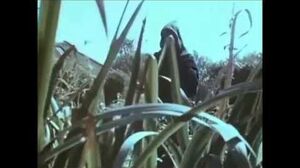 The Spirit Of Dark And Lonely Water (Public Information Film 1973)