Elemental powers that befits their names

To see Lo-Pan reach his goals.

The Storms are a trio of elemental masters who serve Lo-Pan in his quest to become whole again and the secondary antagonists of the 1986 action/comedy film Big Trouble in Little China. They disguise themselves as executives working on Lo-Pan's facade company. They are, respectively, Rain, Thunder and Lightning, and all of them possess control over atmospheric phenomena.

They are fought numerous times throughout the movie by the heroes Jack Burton and Wang Chi. Rain is the first to die, in a sword fight against Wang during Lo-Pan's wedding ceremony. Thunder commits suicide after Lo-Pan is killed by Jack, inflating into a large blob and exploding. Lightning is killed during the heroes' escape, as he pursues them they drop a large statue on him.

The Storms are masters of martial arts and skillful with various weapons, though each of them had special skills of their own: Thunder can conjure green portals, possesses superhuman strength, and can inflate his body like a balloon to deflect blunt projectiles. Rain can unleash a powerful breath that can push anything it hits, flying via levitation, and summon rain, true to his name. Lightning's special ability is manipulating electricity and lightning for various purpose, such as using a lighting bolt to travel down or up. 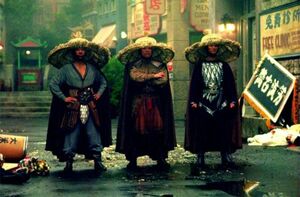 The Storms (from left to right): Rain, Thunder, and Lightning 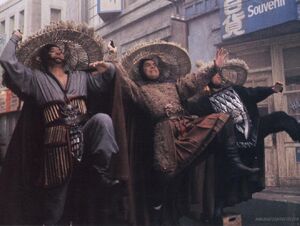 The Three Storms preparing to attack 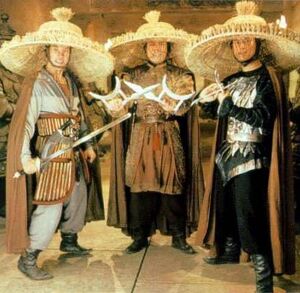