The Stranger (The Walking Dead)

Get revenge on Lee's group for stealing his family's supplies (both failed).

Before the zombie outbreak began, he was married to a woman called Tess with whom he had a son named Adam and a daughter named Elizabeth; he was also a little league coach. Early in the outbreak while searching for his missing son, the Stranger's wagon is raided by the games' protagonists (Lee Everett, Kenny, Carley/Doug, Katjaa, Ben Paul and Lilly), believing it abandoned, which drives his wife and daughter away to their deaths.

Seeking revenge, the Stranger stalks Lee's group to kill them but later decides to kidnap Lee's surrogate daughter Clementine, believing Lee and unsuitable guardian for her, causing a chain reaction of events that kills/separates most of the group including Lee himself.

He was voiced by Anthony Lam, and by Roger L. Jackson on the radio (who also played Dr. Logan in the game).

When the outbreak began he and his family managed to survive it for three months, the Stranger then decided to take his son Adam hunting with him but he lost him while they were out there and he was forced to return to his wife and daughter without him, they decide to go searching for Adam and take their station wagon to go to find him in the forest.

They fail to find him and to make matters worse they find that the supplies have been stolen from their station wagon, Tess who had completely lost faith in her husband takes their daughter Lizzy and leaves him, the Stranger finds them dead in the road the next day, taking his undead wife's head with him for company.

He tries to find other survivors by searching for frequencies on his walkie talkie and he eventually finds Clementine, an 8 year old girl who is a member of the group that stole his family's supplies, he then pretends to befriend her in order to find out about her group so that he can plan his revenge, however he begins to plan to kidnap Clementine instead because he thinks that he can take better care of her than her group and her guardian Lee Everett can.

When Lee's group is driven out of their home they begin to head to Savannah, the Stranger gets there first and begins stalking the group who are now on edge because they know Clementine's been talking to someone and he saves most of them from being killed by an incoming swarm of zombies by warning them over the walkie talkie, he is later seen watching Lee bury an undead child they found in the house they were staying and but he quickly runs before Lee can get a good look at him.

Lee's group planned to escape Savannah on a boat and once the Stranger finds out that the boat is almost ready he realizes he doesn't have much time left and lures Clementine out of the house and proceeds to kidnap her. This indirectly causes Lee's eventual death as he is bitten by a walker while searching around the neighborhood for her. Clementine manages to get hold of his walkie talkie in order to tell Lee that they are in a hotel called the Marsh House, after this the Stranger keeps her trapped in one of the rooms.

Lee and Carley and Lilly and Larry and Doug manages to reach the Marsh House alone, he and the Stranger finally meet face to face where at gunpoint he forces Lee and Carley and Lilly and Larry and Doug to listen to his story and then proceeds to criticize several of the decisions that Lee has made, after he has done this he tells Lee that after he kills him he will take care of Clementine and that she will be safe with him although Lee remains unconvinced, while the Stranger is distracted with talking to his wife's head Clementine escapes the room and attacks the Stranger in order to save Lee, Lee then proceeds to attack him in rage and after a brief fight the Stranger is killed.

Before leaving with Clementine to safety. Lee, who can either shoot Stranger to prevent reanimation or leave him to reanimate, takes one last look at him seemingly remorseful for indirectly causing the loss of his family and descent into insanity.

Stranger has two optional deaths, depending on Lee's actions during their fight; 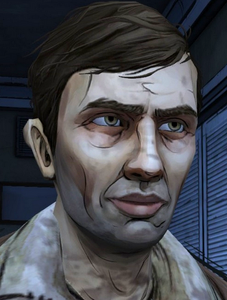 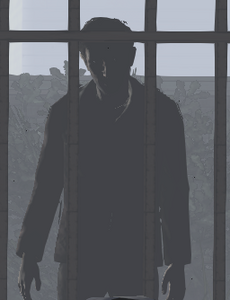 The Stranger watching Lee in Episode 4 "Around Every Corner". 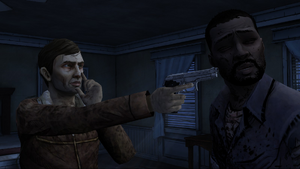 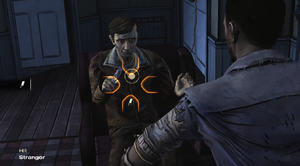 Lee about to attack the Stranger with his weapon. 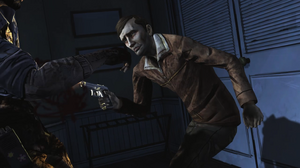 The Stranger shooting Lee in the gut. 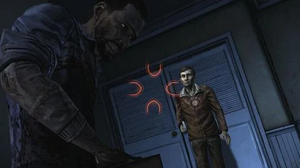 The Stranger walking towards Lee after shooting him. 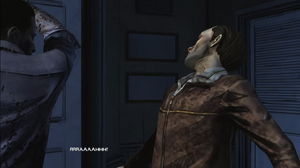 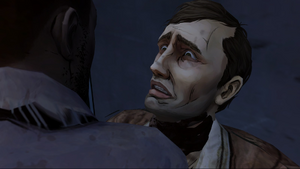 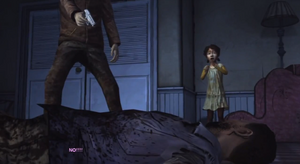