Member of the Destroyer's Chosen.

The Stygian is an Ashworm that serves as one of the Destroyer's Chosen and a boss in the videogame Darksiders.

After Samael was imprisoned by the Destroyer for attempting to rebel against him, The Stygian and the other Chosen were tasked with preventing his return.

The only way Samael could return to power was by consuming their hearts. However the Stygian was later captured by the Demons in the Ashlands, who didn't know that it was one of the Chosen.

They had made a habit of capturing Creatures and forcing them to fight in arenas and the Stygian was one of them.

After War was sent to get the heart of the Stygian by Samael, he managed to fight his way to its prison after reclaiming his mount, Ruin. There he managed to fight it after freeing it and eventually killed it, tearing out its heart to bring back to Samael.

The Stygian's mammoth size makes it extremely powerful in terms of physical ability and it can also burrow through the ground to leap out and attack its prey with ease. However its does have a weak point, a bulb-like appendage in its mouth, which can be attacked after its face harness has been knocked off. The Stygian can also summon smaller Ashworms to aid it in battle with a roar. 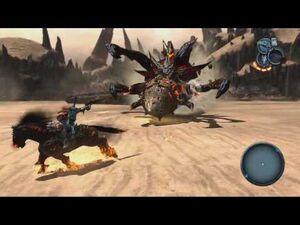 War facing the Stygian.
Add a photo to this gallery

Retrieved from "https://villains.fandom.com/wiki/The_Stygian?oldid=3219463"
Community content is available under CC-BY-SA unless otherwise noted.