Twisted: The Untold Story of a Royal Vizier

Ruler of the Magic Kingdom

Enjoy the spoils of his wealth.

The Sultan is the ruler of the Magic Kingdom and an antagonist of the Starkid Production of Twisted: The Untold Story of a Royal Vizier.

The Sultan bears many similarities to his original Disney counterpart, but takes them to their darker implications.

He is presented as a very Caligulan ruler, enjoying and abusing the perks of his position with no actual experience or urgency. His first appearance has him giving a routine where he talks about his inverted penis with no context or reason for doing so, with his vizier flattering him to no end.

He seems to be apathetic to the suffering of others. Not only has he aloud his kingdom to dissolve into crime and poverty, but he had Jafar's wife stolen away from him the moment he saw her, uncaring of what she wanted, how she or Jafar (who was his loyal servant at the time) felt with no actually need for keeping her (as he could not have children due to his inverted penis) and then asked for his opium immediately after.

He is incredibly gullible, as Aladdin was able to convince him that Jafar was an evil sorcerer despite all evidence to the contrary and having no motivation to actually believe him. It is possible that he was also ignorant of the Kingdom's socio-economic disparity, but it is unlikely.

Despite all of his terrible deeds, he does possess some redeeming factors. Even though Scherezade's daughter was not actually his, he still raised her as his daughter with all of the perks and luxuries that come with the title of Princess. On his deathbed, he leaves the kingdom to the Princess, who then proceeds to restore the kingdom to its former glory. Whether or not he actually knew that she wasn't his daughter or simply needed an heir is never openly stated. 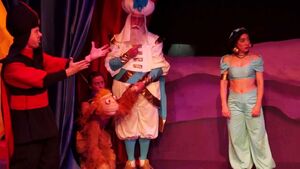 Retrieved from "https://villains.fandom.com/wiki/The_Sultan_(Twisted:_The_Untold_Story_of_a_Royal_Vizier)?oldid=3961020"
Community content is available under CC-BY-SA unless otherwise noted.