The Witch of the Marshlands

Spreading Corruption and Mayhem Across The Continent

The Swamp Witch (also known as Marshland Witch) is the main villain from the anime series Queen's Blade. Initially appears as an unseen force in the first series despite her presence is well-known throughout the land and mostly appear as a speechless entity in the form of a looming fire of the Marshland, she began to make her own appearance in one of the Vanquished Queen OVAs, CD Dramas and playing a major role in both Queen's Blade Sequel, Queen's Blade Rebellion, and it's illustrated stories.

Due to her appearances and being the main threat of Queen's Blade and it's contestants in general, The Swamp Witch is considered to be the Overaching Villain and the real Big Bad of the "Continent Saga" as she was responsible for the actions of Melona, Menace, Airi and Queen Claudette in Queen's Blade saga before Hobby Japan rebooted the series in 2017 into becoming Queen's Blade Unlimited.

She is voiced by Junko Minagawa in the Vanquished Queen OVAs and Rebellion CD Drama who is best known as voicing Mereoleona Vermillion from Black Clover anime series and Cornelia li Britannia from Code Geass series.

Roughly 100 years ago. The Swamp Witch who appeared suddenly openly hated the living things and Queen’s Blade, and building a gigantic castle in the Large Marshland, begun spreading the marshland through her magical power.

The Swamp Witch was a bodiless spirit, if she didn’t possess anyone, she couldn’t display her full power. Although the witch had tried many bodies so far, none of the bodies could withstand the use of her mighty magical power for long. Therefore, the witch set her eyes on Werbellia. She was a beautiful high ranking demon, daughter of the Demon King of the Netherworld. The Swamp Witch summoned her from the Netherworld under the pretense of helping to conquest the world.

On the other hand, a man known as Pope Stephan, the supreme leader of the religion, got to know that The Swamp Witch was cooperating with the daughter of the King of the Netherworld, and went to subjugate them. Although the Pope lost the battle facing Werbellia in the swamp, he actually succeeded in sealing her power. That is, Werbellia fell in love at first sight with the Pope and gave herself to him. The Swamp Witch was stumped. As long as Werbellia continued her sweet married life, let alone her body, it’d be near impossible to borrow her strength.

5 years passed, husband and wife had two daughters, and they formed a happy family. Then, the witch eventually kidnapped the two daughters, luring the Pope to her own castle and sealing him alive in the Netherworld forever.

Though the Swamp Witch tried to usurp the body of Werbellia, despaired at her husband’s disappearance, her plan failed. Werbellia was a mightier being than she could have imagined. She got angry, and went back to the Netherworld. Her two daughters escaped secretly to the town by the hand of an identified human. And then, time passed, and the moment came when Aldra was defeated at the tournament. Once again, the witch summoned Werbellia. The witch had obtained the “Controlling Treasure” handed down by the Amara Kingdom from Menace, and using the treasure on that body, she controlled Werbellia. As Werbellia, the Swamp Witch first cast the “Amplification Curse” on the new Queen. If she amplificated her personality that respected the order to an abnormal degree, it’d be easy to manipulate her in the future. Placing Melona (a fake Ymir) as a supervisor, the Queen substantially belonged to the witch. She was made to declare the abolition of Queen’s Blade, calamity befell and a “Beautiful Fighters Hunt” began to erase the people according to the prophecy. But the prophecy said that she couldn't kill them. Then, the witch rendered them powerless, casting on them curses crueler than death. This way, the witch’s preparations to rule the Continent were complete, without her actually finding herself on center stage. She was keeping an eye for a chance to depose the Queen, and seize the throne for herself. But the two daughters of the "vessel" she had kidnapped became an obstacle! Why didn't the prophecy told her about the existence of these two people? Wasn't the prophecy that almighty, or did the "vessel"’s maternal instincts hinder it? That will always remain a mystery.

During the first cour of the anime when the current Queen's Blade tournament is ongoing, she was never seen in her physical form. However, many of her minions are able to communicate with her via a face that was made of fire with embers that resembles Werbellia's face. She does communicate via the hosts that she possessed including Werbellia who made her appearance in Vanquished Queen OVAs.

As Werbellia, she wears a black, purple, and red dress with a small black bra underneath as well as a black and red bat themed garter and a black spider-designed crotch-piece(which is her true appearance). She also carries a staff type weapon. She has black gloves with red finger tips and high boots with flame like patterns around the ankles, her outfit has several gold bands attached to it as well, one on each arm, one on each upper thigh, and one around her forehead. She also has a crest of some kind located directly under her breasts centered with a green gem. On her head she wears a small crown that holds her hair in a ponytail, the crown also has a small green gem in it with a black line running around it.

Her true appearance is a parasite that looks like a black spider like creature that takes the form of a crotch-piece.

The Swamp Witch wants nothing more than to put an end to the Queen's Blade Tournaments, presumably so that she can rule over the land without much interference from a Queen. Although she is never seen by most, her presence is known and feared throughout the land.

The Swamp Witch is very well versed in black magic, being able to pull Melona and Airi under her control and even resurrecting the Amaran Princess Menace and the dreaded pirate Liliana. She is also skilled in necromancy, capable of building an entire army of the undead. 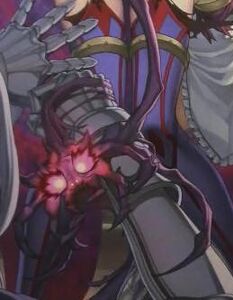 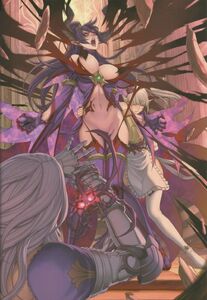 Retrieved from "https://villains.fandom.com/wiki/The_Swamp_Witch?oldid=3558546"
Community content is available under CC-BY-SA unless otherwise noted.