Ally with Greys (alien colonizers intent on colonizing Earth) and assist them in their quest to colonize Earth.

Have The Project successful.

Treasonous Officials
The Syndicate are the central antagonistic faction of the television series The X-Files and were inspired by the legend of the New World Order.

The Syndicate was a secretive organization that represented certain global interests. The Syndicate was formed in 1973 and was destroyed in 1999. The group involved several members of the CIA and the State Department. They conceived of and managed the Project - a global conspiracy operated by the Syndicate. It was a massive undertaking that involved the Syndicate in a sinister alliance with an alien race that intended to colonize Earth.

The Project began in earnest on October 13, 1973 when members of the Department of State convened to create the Syndicate. They made a deal with the aliens to assist in the colonization of Earth whereby they presented to the aliens human genetic samples in the form of handing over loved ones. In return, Syndicate scientists were given an alien fetus.

One of the major goals of the Project was to create an alien/human hybrid using both human and alien DNA taken from the fetus. Many brutal experiments were conducted with genetic hybridization and cloning in the relentless search for a hybrid. Cassandra Spender was the first successful hybrid.

While simultaneously developing an alien/human hybrid for use as a slave race, the Syndicate also worked on a vaccine that would resist the black oil and ultimately destroy the alien race.

In 2000, a UFO collided with a Navy fighter jet and crashed in Bellefleur, Oregon. The Cigarette Smoking Man quickly saw this as an opportunity to revive the Project. He had Marita Covarrubias retrieve Alex Krycek from the Forj Sidi Toui penal colony in Tunisia to collect the spacecraft before it completed rebuilding itself and left. However, Krycek was unable to find the ship as it had a cloaking device enabled. Fearing he had been set up by the Smoking Man yet again, Krycek returned and nearly murdered him. 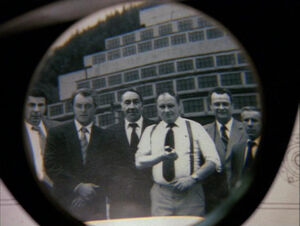 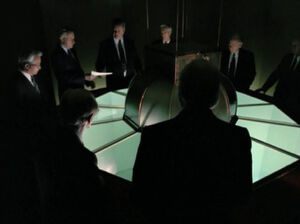 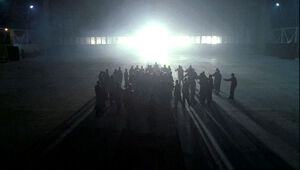 End of the Road
Add a photo to this gallery

Retrieved from "https://villains.fandom.com/wiki/The_Syndicate_(The_X-Files)?oldid=4164708"
Community content is available under CC-BY-SA unless otherwise noted.