The Terrible Oni is an antagonist from the 2008 puzzle platforming video game LittleBigPlanet. It is an ancient fire demon living in a volcano lair in The Islands, wrecking havoc.

When Sackboy arrives in The Islands, he is greeted by Grandmaster Sensei, who seeks his help to defeat the Terrible Oni. She first puts him through a gauntlet to test his skills, then tasks him with defeating the Evil Sumo, taking back her stolen castle, and freeing the flame-throwing cat. Sackboy succeeds, and the Grandmaster decides that he is ready.

Grandmaster Sensei gives Sackboy access to her airship, which takes him through towers and to the charred and fiery volcano lair of the Terrible Oni. After landing the ship, Sackboy makes his way through the active volcano to the Terrible Oni's chamber, where it attacks with a giant knife and fireballs. The flame-throwing cat is there, offering to help if Sackboy uses the switch to push it closer to the demon. Sackboy must dodge the knife and fireballs to reach the switch and push the cat forward, all while the Terrible Oni uses the fireballs to push the lever back. After pushing the cat far enough, it will unleash a torrent of explosions, destroying the Terrible Oni in the process and leaving it as nothing but a skeleton. 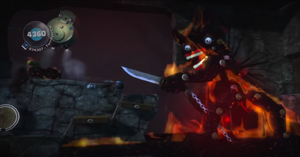 The Terrible Oni vs Sackboy. 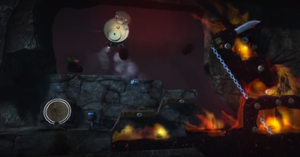 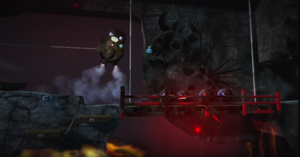 The Terrible Oni's death.
Add a photo to this gallery 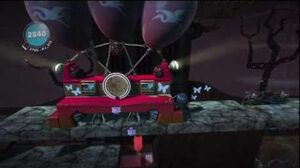 Retrieved from "https://villains.fandom.com/wiki/The_Terrible_Oni?oldid=3892359"
Community content is available under CC-BY-SA unless otherwise noted.