The Man in the Hat

Owner of the Signal Tower

Ability to travel through televisions

Prevent Mono and Six from reaching the Signal Tower.

The Thin Man is the main antagonist of the 2021 indie horror video game Little Nightmares 2. A tall, mysterious humanoid entity who is closely linked with the Signal Tower and the televisions across the world, the Thin Man seems to be the apparent cause of the Transmission that has distorted the Pale City, its residents and likely a vast majority of the world. He takes a nefarious interest in Mono and especially Six, pursuing them during their journey through the Pale City.

The Thin Man shares the characteristic of not speaking a single line of dialogue with the rest of the characters in the games, but his general behavior and abilities are unlike any of the other antagonists encountered in Little Nightmares 2. While the Hunter, the Teacher and the Doctor are all shown to be highly aggressive, violent and hasty, the Thin Man's demeanor is eerily nonbelligerent and calm, since he patiently pursues the Mono and Six at his own pace, but remains hostile nonetheless. The Thin Man's presence always seems to emit noises one would hear on an old television, such as buzzing and signal screeching.

Similarly to Mono, the Thin Man can tune into the Transmission, allowing him to use televisions as portals by making physical contact with their screens. He uses this ability to travel through the Pale City and its outskirts efficiently. Among the rest of his abilities are being able to teleport at will, often using his teleportation to travel small distances ahead to catch up to Mono or get past certain obstacles; the distortion of reality itself via his control over the Transmission that has left the Pale City warped and desolate; slowing down time for anyone who is within his presence; and some form of telekinesis, as he is able to occasionally open doors without touching them and can pull Mono or Six into his hand without making physical contact with them once he closes in on them. The only known way to combat the Thin Man is by tuning into the Transmission and using it against him, which is what allows Mono to defeat him.

Despite having kidnapped at least one child before, the Thin Man is unusually focused on stopping Mono and Six, relentlessly hunting them once he is made aware of their presence deep within the Pale City. During their first encounter, it is made very clear that the Thin Man is more intent on capturing Six than Mono, immediately snatching Six away while paying little attention to Mono while he is cornered. The reason behind the Thin Man's decision to go for Six first may stem from vengeful animosity towards the girl, as the end of Little Nightmares 2 heavily implies that the Thin Man is an older, future version of Mono who became the Thin Man after he was left behind at the Signal Tower by Six. Furthermore, the Thin Man's motivation for capturing Mono, while vague, may be to prevent Mono from suffering the same fate as he did, which would in turn thwart a time loop. On the other hand, if the Thin Man himself is not a future version of Mono but rather an identity assumed by those who serve as a conduit for the Signal Tower, then the Thin Man may be trying to prevent Mono from succeeding him by hunting him down and kidnapping Six.

The Thin Man is an extremely tall, flexible and emaciated humanoid entity with unnaturally long limbs. He appears to have a clean-shaven, middle-aged looking face with wrinkles, sunken eyes he always seems to keep shut, sharp cheekbones and a deathly pale complexion. He adorns a gray-black suit, a white shirt underneath and a gray-black fedora. Possessing an overall bleak color palette with his pale skin and dark suit, the Thin Man overall resembles a man one might see on old, black and white television from the 1940s to 1950s due to his connection with all of the televisions in the Pale City. To further allude to the theme of televisions, the Thin Man possesses a glitchy, static aura that occasionally causes him to blur, twitch, glow a blueish color and flicker whenever he moves.

Little Nightmares: Secrets of the Maw

The Thin Man makes an appearance in the second chapter of the promotional digital comic book app for Little Nightmares 2. After a young boy trying to survive in the Wilderness comes across a shed with a trail of blood leading into it, a nearby television suddenly turns on. The silhouette of the Thin Man can be seen on the screen while the boy approaches it with his blindfold on, unaware that the Thin Man is emerging from it. Just as the boy removes his blindfold to inspect the television, the Thin Man drags the boy into the television screaming. What happens to the boy is ultimately unclear and why the Thin Man is kidnapping children is unknown.

Mono, a determined boy traveling to the Pale City, has a dream where he sees a door marked with an eye at the end of a dark, twisted hallway. During his journey through the city with Six, Mono tries to tune into the Transmission via multiple televisions he comes across to transport himself to the hallway to see what is behind the door, but is unsuccessful each time because of Six pulling him out of the television. Once he and Six find a television in Chapter 4, Mono transports himself into it again and succeeds in opening the door and finds out what waits inside the room: the Thin Man sitting on a chair. After the Thin Man ominously stands up, Six quickly pulls Mono out of the television to safety. Noticing the Thin Man trying to emerge from the television, Six beckons for Mono to run away, but the intense Transmission emitting from the television as the Thin Man emerges causes Mono's head to hurt and temporarily incapacitates him, forcing Six to run without him. The Thin Man then chases Mono and Six through the desolate building until he corners them, forcing Mono and Six to hide under a bed and a table respectively. As he enters the room, the Thin Man ignores Mono and instead snatches Six and teleports away to the Signal Tower while she screams.

Mono is then forced to venture through the city alone while avoiding dozens of Viewers, but has acquired the Thin Man's ability to use televisions as portals in the process. Mono eventually comes across Six trying to escape through a television. He tries to pull Six out, but the Thin Man is already on the other side and swiftly pulls her back in so she cannot escape from the Signal Tower. The Thin Man then emerges from the television and relentlessly stalks Mono, intent on capturing the boy as well. Mono manages to evade the Thin Man by sneaking under the floorboards of a separate room, but he is forced to jump out of a window and onto a series of abandoned railroad cars once the Thin Man catches up to him. The Thin Man teleports inside the railroad cars and pursues Mono once again, but the boy manages to escape him by reaching the train, activating it and detaching the rear railroad cars. Once the train crashes, Mono, badly hurt, arrives at the road leading to the entrance of the Signal Tower itself, but the Thin Man teleports in front of him. Before the Thin Man can grab him though, Mono tunes into the Transmission and uses it to repel the Thin Man. Having finally found a way to combat the Thin Man, Mono unleashes his full power over the Transmission to disintegrate the Thin Man. Mono then uses his newfound telekinetic abilities to pull the Signal Tower towards him and enters the building.

At the Signal Tower, Mono discovers that Six has been transformed into a hideous monster while under the Thin Man's captivity. After Mono defeats the monstrous version of Six and turns her back to normal, the two children are chased by walls of flesh emerging from the walls of the Signal Tower during their escape from the tower. As the path to a television portal collapses, Mono grabs onto Six's hand while jumping over to the ledge. However, Six decides to drop Mono into the chasm and leaves the Signal Tower by herself. The true nature of the Thin Man is then revealed: as Mono sits on a chair at the bottom of the pit of flesh in sheer defeat, the Flesh Walls close in on him and transport him to an empty room. As time passes, he ages and grows taller and lankier than he ever was before until he eventually becomes the Thin Man. This reveals one of two things: either Mono is a younger version of the Thin Man, destined to become the terror of the Pale City as a result of Six's betrayal; or that whoever becomes a conduit for the Signal Tower becomes the new Thin Man. Either way, Mono is revealed to be in the same room at the end of the hallway he saw in his dream and the door closes, leaving Mono trapped in the Signal Tower. 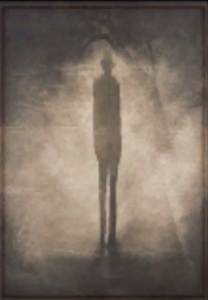 A portrait of the Thin Man in "The Residence". 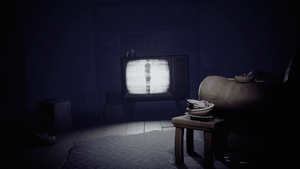 The Thin Man's silhouette appearing in a television after the credits of Little Nightmares: Secrets of the Maw.

The silhouette of the Thin Man appearing in a television at the end of the Little Nightmares 2 announcement trailer. 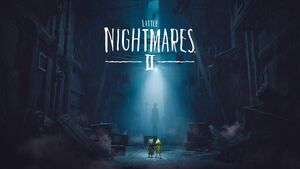 A promotional image of the Thin Man confronting Mono and Six in a street. 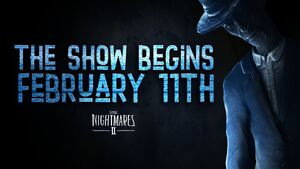 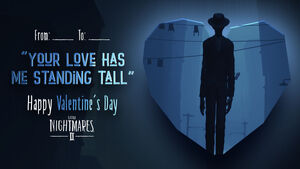 A Valentine's Day promo of the Thin Man. 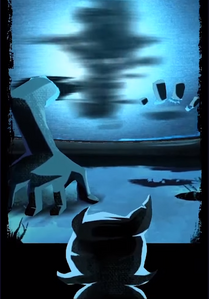 The Thin Man emerging from a television to kidnap a young boy in the Digital Comic. 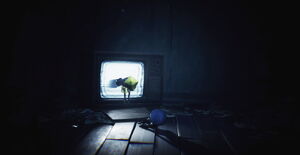 Six getting pulled into a television by the Thin Man. 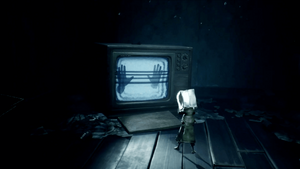 The Thin Man about to emerge from a television. 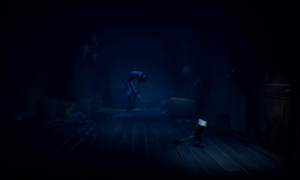 Mono trying to escape from a room while the Thin Man emerges from a television behind him. 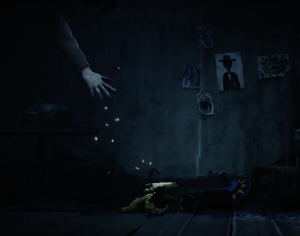 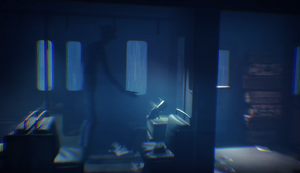 The Thin Man chasing Mono through an abandoned train. 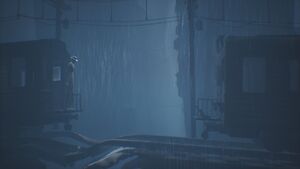 The Thin Man watching Mono escape on a train after he detaches the rear railroad cars. 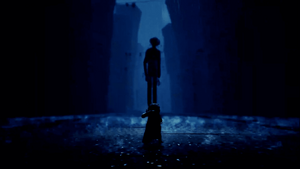 The Thin Man confronting Mono on the road leading to the Signal Tower. 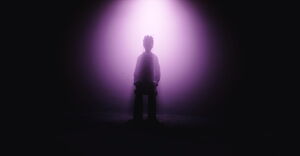 Mono, as he ages and grows in the Signal Tower, slowly begins to transform into the Thin Man.
Add a photo to this gallery

Retrieved from "https://villains.fandom.com/wiki/The_Thin_Man_(Little_Nightmares)?oldid=4220698"
Community content is available under CC-BY-SA unless otherwise noted.