Start a Wiki
The Thing Upstairs is a major but ultimately unseen character in the claymation series The Trapdoor - an evil and eternally hungry demon The Thing Upstairs is the master of the protagonist Berk and has the monster do all manner of tasks, first and foremost amongst them being feeding him.

He was voiced by Nick Shipley.

The Thing Upstairs resides within a massive and evil-looking castle and as mentioned above the demon is obsessed with eating - however his "food" is often vile and grotesque, such as worms or similar. There have even been occasions where Berk has feed monsters who emerge from the titular Trapdoor to The Thing Upstairs.

A fan art of The Thing Upstairs. 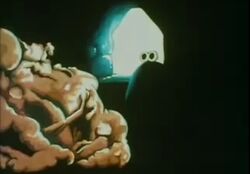 A brief appearance of The Thing Upstairs.
Add a photo to this gallery
Retrieved from "https://villains.fandom.com/wiki/The_Thing_Upstairs?oldid=3530892"
Community content is available under CC-BY-SA unless otherwise noted.