Pervert up in the tower (by Wyald)

Putting a lot of effort and dedication torturing his victims

Torture his victims and enjoy every moment he spends mentally and physically breaking his victims.

The Torturer is a major antagonist of the Berserk series. He was a short, deformed man with a hare-lip and a large bump on his forehead. He also worked for the King of Midland as he was ordered by him to torture Griffith after finding out the latter of sleeping with the former's daughter, princess Charlotte. Despite only appearing in the Golden Age arc as a minor antagonist, the impact he left on Griffith and thus the rest of the story overall make him a major antagonist for the rest of the series.

Later, when the torturer began to torture Griffith, he admired that Griffith manage to endure the pain with no screaming and crying. Just then, the torturer notices a Behelit on Griffith as he then snatched it to take a look before accidentally tossed it away into the drain.

After a year later, he then mutilates Griffith, gleefully spending all the time in the world subjecting Griffith to various methods of tortures, and cut out his tongue and keep it as his collection. When the rescue squad from Band of the Hawk arrived to break their leader out of prison, having alerted the guards, the torturer locked them in his cell as he is delighted to have more subjects to torture. Feeling confident that he is safe as Guts demanded if he is the one who mutilated Griffith, the torturer confessed and described every atrocities he committed in graphic detail and TMI manner. He is later killed when Guts runs him through with his sword, cuts his tounge out in revenge for what he did to Griffith, and throws him to his death.

The torturer is an extremely depraved individual who considers his work as some form of an art, dedicating himself every moment he spends mentally and physically breaking his victims. His methods are repulsive and beyond cruel, (albeit effective), consisting of flogging, elinguation, boiling water baths, flaying, and tendon slicing, muscle atrophies etc to name a few. He also loves psychological torture, and is very prone to child-like taunts. He's clearly a coward, however, as the moment Guts attacks him, he's begging for mercy as pathetically as possible. He also mockingly claims to have formed a 'spouse-like bond' with Griffith after their year together implying he may have raped him. 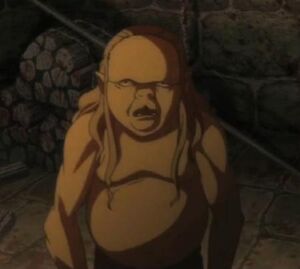 The Torturer in the third anime film.