The Torturer was a minor villain and one of the antagonists in the Berserk series. He was a short, deformed man with a hare-lip and a large bump on his forehead. He also worked for the King of Midland as he was ordered by him to torture Griffith after finding out the latter of sleeping with the former's daughter, princess Charlotte.

Later, when the torturer began to torture Griffith, he admired that he manage to endure the pain with no screaming and crying. Just then, the torturer notices a Behelit on Griffith as he then snatched it to take a look before accidentally tossed it away into the drain.

After a few years later, he then mutilates Griffith and cut out his tongue and keep it as his collection. He is later killed whin Guts runs him through with his sword, cuts his tounge out in revenge for what he did to Griffith, and throws him to his death. 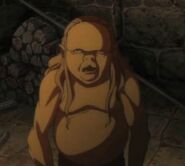 The Torturer in the anime
Add a photo to this gallery
Retrieved from "https://villains.fandom.com/wiki/The_Torturer_(Berserk)?oldid=1823290"
Community content is available under CC-BY-SA unless otherwise noted.