Supposed leader of the Abyss Order.

Traveling across the stars.

Dethrone the Seven Archons and destroy the nations of Teyvat (ongoing).
Restore the Kingdom of Khaenri'ah (ongoing).

Lumine/Aether, also known as the Princess/Prince, is one of the two main antagonists of the 2020 action role-playing fantasy video game Genshin Impact (alongside the Tsaritsa of Snezhnaya).

A pair of twins traveled across the stars, visiting myriad worlds using their unknown powers. Eventually their journey brought them to the world of Teyvat, where they witnessed the horrific destruction of the nation Khaenri'ah by the hands of divinity. The siblings tried to flee Teyvat, but were barred by an Unknown God who defeated and sealed their powers away before separating them from one another. Now stranded on Teyvat, the first sibling to awaken embarked on a journey across the world. The Twin was once travelling partners with Dainsleif at some point when they've taken a painful journey, but the Twin no longer travels with Dain and didn't make it to their journey's end together.

After the end of their journey, the first sibling swore to topple the divine from their thrones and destroy the nations of Teyvat that they ruled over. They became the supposed leader of the Abyss Order, a faction of former Khaenri'ah denizens who had been transformed into monsters of the Abyss and sought revenge on the Gods of Teyvat and the Heavenly Principals. Five hundred years after Khaenri'ah's destruction, the second sibling awoke from his/her seal and became a Traveler who journeyed across Teyvat in search of their twin.

Lumine and Aether were a pair of mysterious twins who journeyed across the stars and visited myriad worlds. Their travels eventually brought them to the continent of Teyvat, where they intended to have an enjoyable adventure before moving on. However, instead they found themselves bearing witness to the the destruction of the Kingdom of Khaenri'ah, an advanced civilization that was receiving divine retribution from the gods of Celestia that ruled over Teyvat. Horrified by what they witnessed, the twins attempted to flee Teyvat but were barred from exit by a god who called herself the "Sustainer of Heavenly Principles."

The twins battled with the god, but were quickly overwhelmed and subdued. One of the twins awoke in Teyvat and began embarking on a journey with a survivor of the destruction of Khaenri'ah named Dainsleif. At the end of their journey, the twin bore witness to the true nature of the world and decided to destroy the gods of Celestia, as well as the nations of Teyvat that were under their purview. To that end, they joined the Abyss Order, a confederacy of monsters spawned from the Abyss that were remnants of the people of Khaenri'ah. Dainsleif, on the other hand, disapproved of the Abyss Order's genocidal plans and decided to resist them.

The Dragon of the East

Around five hundred years after the destruction of Khaenri'ah, the twin became the leader of the Abyss Order. They orchestrated a plot to corrupt Dvalin (a powerful dragon that resided in the nation of Mondstadt and followed the God of Freedom and Anemo Archon Barbatos) using the blood of the long-dead dragon Durin and turn him into a weapon of war for the Abyss Order. Their plan proceeded as they had hoped, with Dvalin being corrupted into a destructive menace known as "Stormterror." While overlooking Stormterror's lair, the twin was approached by an Abyss Mage who proclaimed that their homeland would return.

Later on, while wandering around Mondstadt, the twin was once again approached by an Abyss Mage. The Mage reported that Dvalin had been freed from his corruption by the combined efforts of Lord Barbatos and the twin's long-lost sibling (known as the Traveler), who had recently awoken in Teyvat like the twin once had and was journeying across Teyvat looking for the twin. Shocked to hear of their sibling's re-emergence, the twin rushed to Stormterror's lair where they found the Traveler battling a group of monsters. Instead of reuniting with the Traveler, however, the twin thought it best to finish their mission against the gods first.

Sometime later, the twin orchestrated a similar plot to the previous one, this time in the nation of Liyue. They planned to have the Abyss Order take the limbs of the defeated god Osial and the core of the first Automaton and combine them with a defiled Statue of the Seven to create a mechanized god under their command that would serve as a weapon of war. The Abyss Herald responsible for overseeing the construction of the god was tracked down and defeated by the combined might of Dainsleif and the Traveler. However, before the Herald could fall into enemy hands, the twin themselves arrived and intervened.

The Traveler was shocked to see the twin they had been searching for working for the Abyss Order, and begged them to leave the Abyss behind and travel with them once more. The twin tried to dissuade their sibling from working with Dainsleif, explaining that he was their sworn enemy and that he was partially responsible for the destruction of Khaenri'ah due to his negligence. They also told the Traveler that they could not join them until after they had completed their mission to seize authority from Celestia. With that being said, the twin left the scene via a portal opened by the Abyss Herald.

The Twin attempted to destroy the Seven and the seven nations as well revive Khaenri'ah and remove the curse of immortality from the Hilichurls (who were citizens of Khaenri'ah) and the Black Serpent Knights (who were once Royal Guards of Khaenri'ah) by force believing it would revert them back as they were once before. However, according to Dainsleif, his/her attempts is nothing but a height of foolishness as there is no undoing the curse (not even a 1% chance) including by removing the curse by force would only inflict significantly damage for those who possessed the curse that includes killing them, when the Twin is stubborn as ever persistently and misguidedly.

In Perilous Trial Event, the Traveler saw their Twin, but that was only an illusion. The Traveler discovered the Fantastic Compass when his/her Twin's illusion guided him/her in order for the Traveler to use the Compass as well escaped the deepest depths of the Chasm along with Arataki Itto, Kuki Shinobu, Yelan, Yanfei and Xiao. 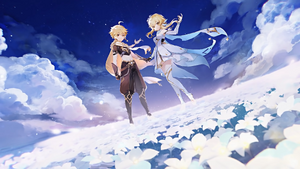 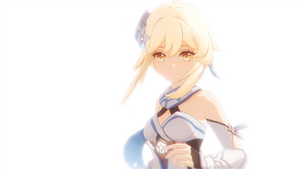