The Trickster (Dead by Daylight)

Serving The Entity.
Killing and torturing people to enjoy their screams of agony.

Kill people to use their screams for his music (ultimately failed).
Serve the Entity.

Ji-Woon Hak (Korean: 학지운), better known as The Trickster, is one of the playable killers in Dead by Daylight. He was a famous K-pop musician who became a deranged serial killer when his fame began to fade. He is the canonical arch-nemesis of Yun-Jin Lee.

He is voiced by Titus Kim.

Ji-Woon Hak started at humble beginnings as a child, where he would perform using knives at his father's restaurant, earning extra revenue for his father who in turn used the money to send his son to classes to help him become a star. Soon becoming the leader of a failing K-Pop band and rocketing them into success, Hak enjoyed the admiration of the crowd until a fire broke out at the studio, killing the members of the band. He had an opportunity to help them, but decided not to so that he could take their fame and fortune for himself.

After this, Hak became a solo artist but his fame began plummeting, and looking for a way to save his fame, Hak then remembered his dead bandmates' last moments and them screaming his name to help them. He later made a goodbye video for each of the band mates, but this was likely done for publicity.

A darkness awoke within him as he soon cornered and murdered a man in his apartment, but having gagged him, he didn't hear his screams and left small clues for the police. He then dragged more victims to an abandoned warehouse, recorded their screams and edited them into music, then left small clues for the police to find. While his fans enjoyed the new music, his employers weren't fond of it and began threatening to fire him, with the only one sticking up for him being his manager, Yun-Jin Lee.

Due to this, Hak plotted his revenge. He kidnapped Lee and his employers and murdered all of them except for Lee, but not before torturing them. As he bowed and went to kill Lee, a dark fog enveloped them and transported them into its realm (with Yun-Jin becoming a survivor). Now, The Trickster serves as one of the Entity's Killers to make his victims scream.

Dissonance for the Dead

Trickster's lore is further explained in the tome Crescendo. At age 7, during class, Ji-Woon killed a student's pet hamster out of spite for turning the class's attention away from his flute playing. 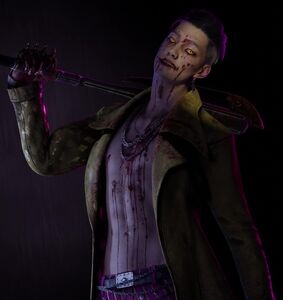 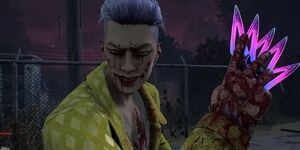 The Trickster's evil grin as he prepares to use his throwing knives to kill his victim. 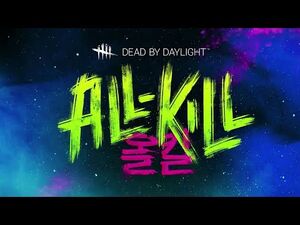