Destroy the world (why do they want that is unknown).

The Trinity is a trio of goddesses in Skullgirls.

The Trinity consists of Venus Lovelace, Aeon, and their mother; and are major antagonists in the game. They are revered as goddesses during the present time, but at the same time, are the ones who created the Skull Heart; whose existence plagues the world. Their objective and motivations remain a mystery. Though the Skull Heart claims its purpose is to bring the world's destruction, it is not exactly known what that entails.

The Trinity were originally regular human beings from a Queendom which existed in ages past. Though they were killed by Neferu during that time, they still exist on a separate dimension. They have a a church dedicated to them called the Grand Cathedral (which is also a fighting stage in the game). Many people come to the church to give their confessions, tithes, and so on. Because the Trinity are females, people will say "Goddess-speed" to anyone who could use luck.

However, they are the ones who created the Skull Heart, hoping to turn the ladies of the Canopy Kingdom into Skullgirls, so they could use them to destroy the world. Marie, however, has a strong heart, so she couldn't be controlled by the Skull Heart, leaving her to continue her own mission to destroy the Medici Mafia for messing with her and Peacock. The Trinity did not accept this and wanted Double to take her down. Parasoul and Double worship them with their inverted cross necklaces. Double calls them "masters". Parasoul seems to be unaware of the fact that The Trinity are the ones created Skull Heart that cost Queen Nancy (Parasoul's mother) her life.

In Valentine's story, she intends to put an end to them and their plans of destruction. She wishes to become a Skullgirl not only to atone for turning Carol into Painwheel, but also to get a better look at them. She is hoping that her research will help the Labs in the future to bring them down for good.

It is unknown as to why The Trinity wants to destroy the world. 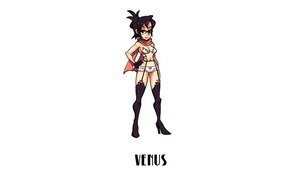 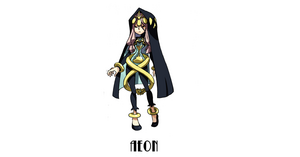 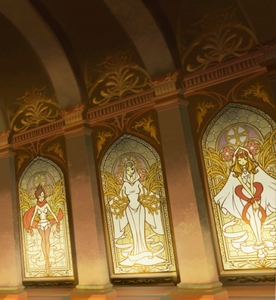 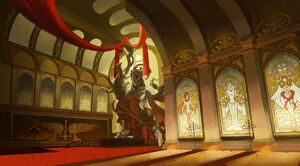 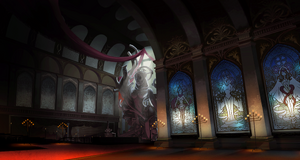 Crowded with worshippers
Add a photo to this gallery

Retrieved from "https://villains.fandom.com/wiki/The_Trinity?oldid=3892365"
Community content is available under CC-BY-SA unless otherwise noted.