NOTE: This article is about the incarnation of Turtle from the Arrowverse. The mainstream version can be found here: Turtle (DC).

Russell Glosson, nicknamed The Turtle by Cisco, is an antagonist in the second season of The Flash. He is a meta-human, having gained the power to unleash a pulse wave that absorbs all of the kinetic energy around him into himself, leaving everyone and everything around him in a temporary state of potential energy.

He is portrayed by Aaron Douglas.

While Earth-2 Harrison Wells is trying to work out a way to make Barry faster, Cisco explains that he has an idea to make Zoom slower. Initially Harrison waves it off as impossible as the tranquilizer darts had no effect on him but Cisco explains it may be a way to steal Zoom's speed.

Cisco shows a video of a guy robbing a bank yet everything else around him has seemingly come to a stop. Barry finds the location of The Turtle's next target. Barry rushes to stop him but finds that he has also been affected by the metahuman's powers. While Russel makes his escape Barry, now able to move again, rushes back to the lab where Harrison Wells explains that The Turtle's power transfers all the surrounding kinetic energy into him leaving his surroundings in a state of potential energy.

The next day Cisco has found The Turtle's next target: a famous painting that is being exhibited that night at 7 pm. Barry decides to use this as an opportunity to kill two birds with one stone and decides to use this night to stop The Turtle and tell Patty he is The Flash. Wells warns him not to as Zoom will use her against him.

Later that night when Barry is prepared to confess to Patty, Barry notices The Turtle in an isolated part of the museum. Cisco also sees him using the facial recognition software. Barry is forced to leave Patty. All of this occurs just before The Turtle steals the painting which Patty notices though her efforts are void as he merely transfers the kinetic energy into the room and escapes. Patty remarks that he may be as fast as The Flash when The Flash appears and says that he is much slower. The Turtle then transfers all the kinetic energy in the room into Potential Energy and shoots a chandelier but Barry has learned how to transfer his Potential Energy back into kinetic energy and runs to try and save Patty . Turtle realizes this and put more effort into his power slowing The Flash even more. The Turtle then makes his escape and The Flash is only just able to save Patty Spivot.

Later that night The Turtle breaks into Patty's apartment. Patty shoots a few bullets at him but he merely transfers the kinetic energy from them making them useless. He then uses his power to catch Patty off guard and kidnaps her stating that he wants to take the thing most precious to The Flash. A while after The Turtle kidnaps Patty, Barry appears at her house searching for her. He then notices the bullets that dropped to the ground during Patty's struggle and is able to come to the right conclusion.

Meanwhile at the Turtle's hideout, Patty is tied to a chair. Turtle states that he wants Patty to stop moving forever. He also states that he won't kill her as it's "too fast and messy". He goes on to say that he doesn't care about hurting her but wants to hurt someone who values her. Patty thinks The Turtle means Barry but The Turtle corrects her saying that he means The Flash. His reasoning is that he saw how The Flash saved her but Patty says that's what he does. Turtle than says it's a waste of time as people take things for granted and that is the reason he takes the thing people value most in life. He goes on to say that his wife took him for granted and wanted to leave him. He then reveals that in order to prevent his wife from leaving him, he removed all the kinetic energy from his wife and put her in a glass box almost as if she was his trophy. He than reveals to Patty that he intends to do the same to her.

Meanwhile everyone at S.T.A.R labs are trying to figure out where Turtle went as he is currently off the grid. Wells realizes that Turtle keeps the things he stole like a serial killer keeps trophies. Caitlin remarks that he has stolen a lot of things which makes Joe realize that he needs a lot of space to keep them. Cisco then realizes that Turtle's wife was an archivist and the archives she worked at shut down three months after the accelerator exploded. Barry runs to the archives and Cisco and Caitlin tell Barry that his only chance of saving Patty is in between each of the Turtle's pulses which is gives Barry two tenths of a second to make his moves.

The Turtle is preparing Patty to be one of his trophies when he hears The Flash entering the archives. The Flash comes running in and Turtle activates his power. Turtle then starts attacking Flash giving him no chance to make a move. After Turtle's assault Flash runs out of the archives. The Turtle remarks that Flash doesn't care about Patty as much as he thought. Meanwhile Flash is running to prepare for his Super Sonic punch. Using the kinetic energy he built up Flash is able to power through Turtle's pulses and push him into a wall knocking him unconscious. Flash then saves Patty.

At the end of the episode Turtle has ended up in one of the pods inside the particle accelerator restricting his powers. Flash makes one last remark telling him that Turtle is now his team's most prized possession. Turtle yells as the door closes on his capsule. He is then killed by Dr. Harrison Wells. 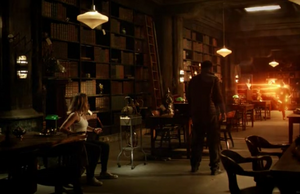 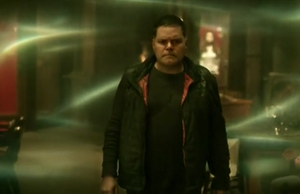 The Turtle using his powers.