Villains Wiki
Register
Don't have an account?
Sign In
Advertisement
in: Outdated Articles, Mature, Partners in Crime,
and 19 more

The Tweedles (The Wolf Among Us)

Goons of the Crooked Man

Writing letters to each other in their office

Prevent Bigby from meddling with the Crooked Man's affairs (failed)

Avenge his brother (Dee; If Dum was killed, failed)

Tweedle Dee and Tweedle Dum, also known as The Tweedles, are major antagonists in Telltale's The Wolf Among Us. They are Fables and minions of the Crooked Man who try to prevent Sheriff Bigby Wolf from leading into the murders of Faith and Lily. Having the appearance of humans, they hide under the cover of detectives.

They were both voiced by Gavin Hammon, who also voiced Kenny in The Walking Dead game series.

Bigby and Snow's investigation takes them to he apparent of Prince Lawrence, Faith's husband. Regardless of whether Bigby went there first, Tweedle Dee will be at the apartment as well. When Bigby sees him, Dee runs away and Bigby chases after him. Ultimately, Bigby corners Dee, and questions him about who he is and what he wants. Dee will allude that his employer needs find the Woodsman to ask him a few questions. Bigby will attempt to arrest Dee, but unbeknownst to Bigby, Tweedle Dum sneaks behind him and knocks him unconscious.

Later that episode, after Bigby defeats Grendel at the Trip Trap, Dee will arrive and attempt to question the inhabitants. Bigby is then presented with the chance to arrest Tweedle Dee or arrest the Woodsman. If Bigby arrests Dee, he will chain him to a lamppost to later be interrogated.

If Dee was arrested, he will be restrained in the basement of the Woodlands while Bluebeard threatens him with violence. Regardless if Bigby's interrogation methods are peaceful or violent, he will question Dee about why he was at Faith's apartment. Dee will reveal that he and his brother were searching for something Faith stole from their boss. Nearing the end of the interrogation, Dee will allude that knows about Beauty's debt and causes Bigby to inquire further. However, the interrogation ends prematurely when Snow interrupts him.

Dee and Dum arrive to Lily's funeral and hold Bigby at gunpoint. While the service is continuing, they will demand that Bigby cease his investigation on Ichabod Crane, and in return, Dee and Dum won't have to harm anyone close to Bigby. Before they can conclude a deal with Bigby, Holly and Grendel notice the two brothers interrupting the funeral. Dee will incite Grendel and Holly by insulting Lily, but the two brothers easily incapacitate Holly, Grendel, and Bigby with their shotguns.

When Bigby arrests Crane at the Pudding and Pie, the Tweedle brothers reappear alongside Bloody Mary and demand Bigby to hand over Crane to them. When Bigby refuses, the Tweedles gun down Bigby as he transforms into his second form. Bigby easily throws the two brothers around and is presented with the option to kill Tweedle Dum. If Bigby chooses to, he will kill Dum by tearing out Dum's throat before Mary shoots him in the side.

When Bigby enters the Crooked Man's lair, Dee (and Dum if he is alive) is/are present to guard The Crooked Man. If Bigby questions Dee about Faith's murderer, Dee will deny disclosing that information. He will either be arrogant if Bigby spared Dum, or he will be spiteful if his brother was killed. When the negotiations turn violent, Dee (and Dum) will attack Bigby. Dee will restrain Bigby, however he is accidently stabbed by Georgie. If Dum is alive, he will cease the attack and tend to his brother's wound. Regardless, The Tweedles will not follow Bigby as he chases after The Crooked Man.

"The Tweedle brothers, Dum and Dee, are thugs for hire. They appear human, allowing them to carry out their contracts in the mundy world without drawing suspicion. They are inseparable as they are ruthless." 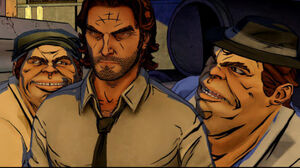 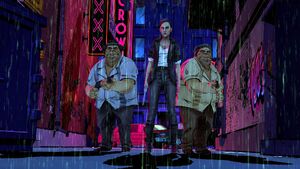 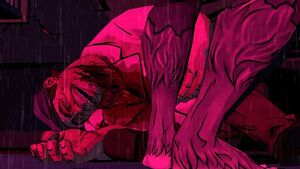 Dum's brutal death at the hands of Bigby (determinant).