Put an end to all living beings.

The Twilight's Hammer is an evil doomsday cult in the Warcraft universe.

Formed during the Second War from a clan of orcs lead by the first ogre mage Cho'gall, the Twilight's Hammer became dedicated to the end of all creation.

Their dedication to the end of all things lead them to the Old Gods. The Old Gods became their masters and transformed the clan into a very dangerous cult. Once they became a cult various races soon joined

They are major villains in several expansions of World of Warcraft, but their biggest role was in Cataclysm, where they became minions of the Old God's greatest weapon, Deathwing, to ensure the Hour of Twilight would occure. Lead to believe that once the Old Gods returned to power, the Twilight's Hammer would be able to share in their new world order, the Twilight's Hammer became more dangerous than ever. They were in Deepholm and were responsible for fitting Deathwing with his Elementium plating and attacked various areas across Azeroth to obtain new members and created as much anarchy as possible. Because of the massive attacks across Azeroth, including the attack of Mount Hyjal, adventurers traveled across many new lands opened by the Cataclysm and fought them all over, ruining many of their plans. Eventually the adventurers made it to the Twilight's Hammer base, the Bastion of Twilight, where they finally killed Cho'gall for good as well as putting an end to Sinestra. With Cho'gall dead, the Twilight Father took his place and the Twilight's Hammer continued to serve Deathwing and the Old Gods. After escorting Thrall to Wrymrest, Archbishop Benedictus is revealed to be the new leader of the Twilight's Hammer and is killed. Despite his death, several powerful members made their attack in the Dragon Soul raid, including Hagara the Stormbinder and the leader of Deathwing's personal escort, Warmaster Blackhorn, both were eventually killed. With no one else to aid him, Deathwing is evetually defeated in two fights and the Hour of Twilight is prevented.

With Cho'Gall, Benedictus, and Deathwing all dead, the status of the cult is unknown, but likely will try their best to bring the downfall of creation. However, by Mists of Pandaria, several will form the Dark Shaman and some will be captured by the Council of Six Daggers, six Warlock trainers who want to learn the secrets of the cult. 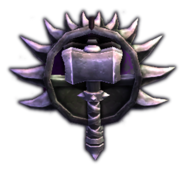 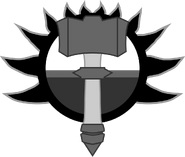 Add a photo to this gallery
Retrieved from "https://villains.fandom.com/wiki/The_Twilight%27s_Hammer?oldid=3467347"
Community content is available under CC-BY-SA unless otherwise noted.