The Undertaker is a professional wrestler in WWE. Like many wrestlers, he has been both a protagonist (face) and antagonist (heel) in the past, though most of the time he is an anti-hero.

The Undertaker was born on March 24, 1965 in Death Valley in a funeral parlor He was the eldest brother of Paul Beare and his unknown mother. the youngest being Kane in the family. Undertaker would always be yelled at within the family. His parents would always get yelled at when Kane did bad things his parents would say he is the eldest and he should have known better.

12 years later in May 19, 1977, Undertaker would set their funeral parlor on fire leaving his Mothers Dead leaving Paul and Kane alive after that Though there was no proof the authorities did not arrest him because of that I.

He started his career in the then-WWF in 1990 as a heel when he was a mystery partner brought in to fight in a Survivor Series match by Ted DiBiase Sr.

It was implied that the Undertaker was undead and possessed supernatural powers. A few months later he was given a manager, Paul Bearer. He was a heel for more than a year until his partner Jake the Snake attacked Miss Elizabeth. Undertaker stopped him, and when Jake asked who's side he was on, he replied: "Not Yours". From then on, although he used heel-like tactics against his opponents he was a face. In 1998, The Undertaker turned heel again by reuniting with Paul Bearer to form the Ministry of Darkness, a cult. This was his second-longest streak as a villain. His Ministry of Darkness, after first trying to conquer the WWF, joined Vince McMahon's Corporation to become the Corporate Ministry.

This lasted until the end of 1999; after a leave of absence, he returned with a biker gimmick, where he went back and forth from being a heel and a face. His return to the dark side came when his brother Kane buried him alive, and he returned from the dead at WrestleMania 20 in 2004. Though occasionally still committing villainous acts, he remained a face until 2017.

From 2018 and 2020, he appeared sporadically but leaned toward being a heel. He began another feud with Triple H. While Triple H used any means needed to win, he was very civil after the match but Taker & Kane still clobbered him and Shawn before taking their leave.It led to an official battle, Brothers of Destruction vs. DX with the latter victorious.

Taker later attacked AJ Styles which led to a feud between the two that became personal when AJ talked about his wife, Michele. As a result, Undertaker reemerged as Big Evil and eventually defeated Styles at Wrestlamnia 36, burying him alive & riding off on his motorcycle.

The Undertaker appears as an anti-hero and a playable wrestler, he disliked The Boogeyman who has hired Santino Marella and Finlay as Nu School, he manages to save Kane from Nu School's mind control devices, when Kane was destroyed by Boogeyman, he plots to avenge his brother by brainwashing one of the members of Nu School into turning him into a zombie to defeat a member of Nu School, the brainwashed member of Nu School was turned back to normal by The Phenom. The Undertaker later defeated Boogeyman in a Hell in a Cell match and seals him into the casket. 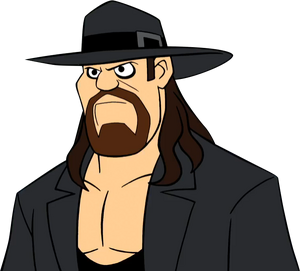 The Undertaker in The Flintstones & WWE: Stone Age SmackDown!
Add a photo to this gallery

Retrieved from "https://villains.fandom.com/wiki/The_Undertaker?oldid=3776304"
Community content is available under CC-BY-SA unless otherwise noted.