Supernatural abilities including divination (predicting those who will die)

Carrying out God's will in claiming those who destined to die

Record the dead of the town

The Undertaker is the main protagonist in the 2011 short film The Backwater Gospel.

While his identity is not openly given in the film, it is heavily implied that the Undertaker is actually Death in the form of an undertaker, hence the name. This theory is best reinforced in two points during the film when upon approaching a corpse, the Undertaker kneels down, stretches open a measuring tape, and measures the corpse. After a few seconds, the camera shudders into black and white, and a flickering set of massive wings momentarily appear on his back. The Undertaker appears to have his movements heralded by flocks of crows, which have long been considered as symbols of death.

In the film, he wears a suit, dress shoes, a top hat, round spectacles, and a medallion. It is interesting to note that the Undertaker's spectacles glow white, whereas every other character, with a few exceptions, has gaping black pits for eyes.

The short film begins with title, then cuts to a man attempting to fix what appears to be telegraph wires by cautiously climbing up the pole to adjust them. There is then a sudden cut to the Undertaker riding his bike, and then back to the man, who has finally climbed up the pole and is attempting to fix the wires. Suddenly the poles' support beams begin to creak, the man pauses, and a flock of crows settle on the telegraph opposite him. The man lets out a gasp as he spots the crows, implying he knew their meaning that the man was going to die. He begins to inch his way back off of the pole, but the beams break, sending the man to fall to his death. The Undertaker is then seen standing by the man's body. He pulls out a measuring tape and stretches it over the corpse- after a few seconds, the screen flickers to black and white, and a massive pair of black wings are seen stretching from the Undertaker's back before the screen cuts to black.

The Undertaker is next seen biking towards the town of Backwater. A crow lands near a Tramp, who is not very popular among the town because of his lack of faith and constant singing about the Undertaker. After angrily staring at the Tramp, The Minister has his heavily muscled son ring the church bell to call the townspeople to church, upon which he lectures the townspeople about how one negative influence could bring the whole town to ruin.

After singing for a while longer, a crow lands near the Tramp. He realizes that the Undertaker is approaching, and goes to warn the townspeople, not out of good intentions, but to scare the fearful people for his own amusement. He interrupts church and calls "The Undertaker's coming" through the window. The people panic, to the Tramp's evident enjoyment, which infuriates the Minister as the people rush to their homes and bar the doors. After some time, the Undertaker arrives to the town via his bike, and as he passes into town, his shadow reveals his otherwise invisible wings. Upon getting off of his bike, the Undertaker walks to the town's well, sits down, and waits.

But, instead of leaving as expected, the Undertaker continues sitting in front of the well with the exact same smile on his face. Suddenly, it begins to rain, and a raindrop drops onto Bubba's head. Bubba looks up towards the sky. His eyes, for only the second time in the short film, are shown realistically in this, implying that he only then understood what had been done. A second after this, rain begins to fall. However, when the first drop had struck the blood-spattered Bubba, it had been indistinguishable from the blood already on his face, implying that the rain is composed of blood and that it was not the Tramp the Undertaker wanted. This causes the townspeople to turn on each other, hoping that if the right one in the group of townsfolk dies, the Undertaker will leave. A violent massacre begins to occur, while the Undertaker sits and watches. Bubba then turns on the Minister, who then pulls out a revolver and shoots him as Bubba charges him. The Minister then crawls his way through the bloody massacre and attempts to try and shoot the Undertaker, but Bubba, despite having a significant portion of his head missing, attacks the minister again. The Minster shoots Bubba again, but the effort was proven futile as Bubba, who was holding a beam of wood in the shape of a cross (ripped from his door some time earlier), falls on the Minister, the cross crushing his head and killing him.

By the next morning, the Undertaker is still there, smiling, as a rainbow hangs overhead. The Undertaker finally stands up, starts whistling, and approaches the body of the person that started the massacre. As had happened in the beginning of the film, he brings out the measuring tape as the camera pans to reveal bloody results of the fighting. As the camera stops zooming out, the screen flickers to clack and white, his wings appear, and the credits roll.

Appearing as seemingly unassuming elderly human undertaker yet imposing at the same time, this entity seemed to be motivated by his duty as the personification of death who put deceased mortals to rest (from measuring their corpses' size to placing them into their respective coffin). Even so, his actions were not motivated by sheer malice, but rather devotion to carry out God's will as His enigmatic Angel of Death. As such, The Undertaker had no will of his own, let alone any form of compassion — his duty is the only thing that mattered. Overall, he is not the true villain in the short film.

Throughout the film, the Undertaker never conclusively shows any specific usage of superhuman powers, adding to his air of mystery. However, owing to his nature as an Angel of Death, he would most likely possesses powers that a human would not. These powers may include facilitating fear-inducing visions in people's minds (thus warping one's mental health to the point of near-insanity) and manipulation of the weather. The Undertaker also seems to attract crows — whether this is because he attracts them with some sort of power, or the crows merely follow him because his coming heralds a large quantity of death (and thus an easy meal for the crows).

At the same time, none of the actual deaths seem to be his doing, as the massacre only began born of mass hysteria due to his sudden appearance and the preacher's own bias. More so, he did not cause the death of the man in the beginning, the pole broke on it's own, Undertaker just knew it was going to happen, as is the fate of the town he visited. 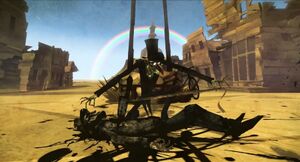 The Undertaker measuring a corpse. 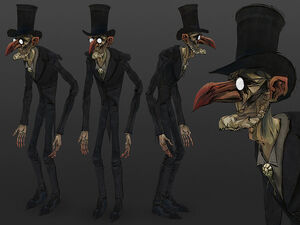 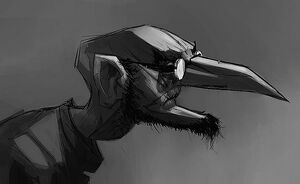 Early concept art for The Undertaker. 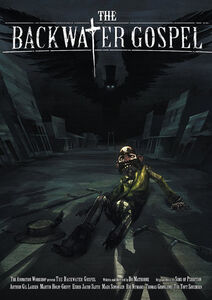 The promotional poster for The Backwater Gospel. 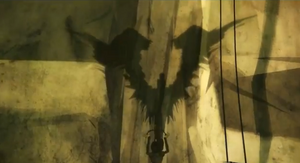 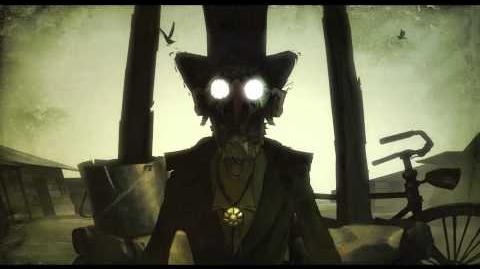