The Great Union of the Fourth Turning Republics

Union of the Fourth

Destroy the Vanguard.
Take over the world.

The Great Union of the Fourth Turning Republics, also known simply as either the Union of the Fourth or The Union, is the overall main antagonistic organization of the Rooster Teeth animated web series gen:LOCK. It is a hegemonic terrorist force bent on eradicating its political rival known as the Polity. Its paramount leader is Brother Tate.

The Union started as an opposing culture to the primary one, the Polity, with different political ideals and systems in place. Though conflict existed between the two cultures, an uneasy peace was eventually reached, though the Union continued to spread propaganda across Polity territory.

Eventually, the Union began giving its members chips in their bodies or a consumable chemical that diverts Nanotechnology, or Nanotech for short, allowing Union members to be safe in the case of a Nanotech attack.

Tensions continued to rise between the two cultures until the year 2068, when the Union suddenly and unexpectedly declared war on the Polity by launching an attack on New York City, a safe zone, by releasing Nanotech that sought out and killed organic matter, including people. The Union unleashed their forces into the city, gunning down any civilians without Union identification. The Vanguard, the Polity's military force, was forced to intervene, but the Union fired missiles at their air units and attacked their ground units with war machines and Nanotech, even hacking into Polity robots and forcing them to turn on the Vanguard, killing many soldiers. When pilot Simone "Razzle" Rasmussen attempted to use her ESD Pulse Rifle to eradicate the Nanotech, the Union's guns seemed to recognize the energy and fire at it, destroying her aircraft and killing her. In a desperate attempt to buy time for civilian and soldier evacuation, pilot Julian Chase used his ESD to destroy all of the Nanotech, but was targeted by the Union guns and went down. The Vanguard was forced to retreat, with New York City falling under the Union's control. Chase was mutilated in the crash, but was saved by the Polity, who began to initiate him into the gen:LOCK program.

Over the next four years, the Union continued its hostile takeover until it had conquered the entire eastern half of the United States. They were soon fought back against by Julian Chase, who had survived and had his mind digitally implemented into a Holon mech, allowing him to fight the Union. The Union, fascinated by the program, captured Julian Chase mind and Holon body, forcing the Polity to use a backup copy of Julian's mind to restore him. However, the Union convinced the original Chase Holon that the Polity had betrayed him, making him a Union warrior known as "Nemesis Chase".

After some time, the Polity began working with the Experimental Science Unit on a mech program. When the Vanguard was sent out to rescue refugees from the border, they were ambushed by the Union. However, in a turn of events, they were unexpectedly saved by the ESU's mechs and their pilots.

As the gen:LOCK program got underway, it is soon revealed that one of the candidates for the program is an imposter and is secretly a Union spy. He manages to kill several guards before attempting to force a gen:LOCK, but is incompatible and dies as a result.

Later, the Union attacked one of the main server centers for The Ether, a massive online virtual reality game system. The gen:LOCK team is sent in to counterattack, with the Polity noting that the attack is well beyond Union borders. Upon arriving, the teams take out the soldiers and mechs fairly easily, but they are later attacked by Nemesis who severely injures Cameron "Cammie" MacCloud and attacks with Nanotech. The mysterious Union holon flees when reinforcements arrive, but the Polity forces retreat from the unknown enemy.

The Vanguard decide to attack a Union manufacturing plant in Atlanta, Georgia, where they rescue some POWs and begin an assault on the Union forces. They succeed in destroying the base, but are attacked by Nemesis again and are shocked when fellow member Julian Chase's voice comes out of it. The Vanguard manage to fight the Holon off and force it to retreat, though everyone is left stunned and untrustworthy of Chase.

Back at the Anvil, Julian Chase approaches Dr. Weller and demands an explanation, to which Dr. Weller reveals that he is the second copy of the real Julian Chase's mind, and the first copy and its Holon was captured by the Union. Dr. Weller explains that the Union Holon is Chase, corrupted by the Union, dubbing it his "Nemesis".

Just then, the Union attacks the Anvil with Nemesis leading the charge and a massive Behemoth war machine attacking the towers. As the heroic copy of Chase fights Nemesis, the Vanguard and gen:LOCK 1 fight back the Union forces. However, Union drones get past defenses and breach the Anvil, allowing Union forces to get in. They begin gunning down any Vanguard inside and make their way towards the lab. The gen:LOCK team is forced to retreat to save their human bodies and escape, but the Union corners Dr. Weller in the lab. However, Dr. Weller activates a suicide bomb that explodes and kills both himself and the Union soldiers present.

The Union attacks with their Behemoth and fires missiles and rockets, but the Anvil is temporarily saved by Chase. The control team powers up a weapon called the Hammer and fires on the Behemoth, bringing it down, only to discover it was filled with Nanotech, which gets loose and eradicates many of the exposed people in the Anvil. In the chaos, Nemesis escapes.

The Union, along with Nemesis, attempt to track down the gen:LOCK team but lose them. The gen:LOCK team gets some help and upgrade their Holons, though Nemesis gets upgraded too. The Union then launches an attack in Chicago, and the Vanguard come to battle them off. As this is going on, the gen:LOCK team arrive and destroy some Union forces and call out Nemesis. They all do battle, and Chase is forced to abandon his body and exceed his uptime to hold Nemesis off. Eventually, Chase and the gen:LOCK team are able to mindshare and overpower Nemesis, finally beating and killing him. Colonel Raquel Marin states that the Polity is no longer holding a line, but pushing back against the Union and taking back their land and freedom.

In the epilogue sequence of the season 1 finale, Union soldiers patrol the streets of one of the Union-held cities during curfew and watches out for any potential attacks. It is then revealed that Rob Sinclair, who was previously thought killed by the spy, is still alive and hiding, disguised as a Union soldier. 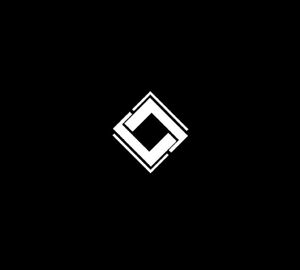 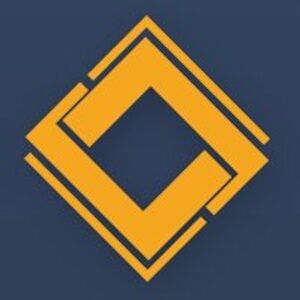 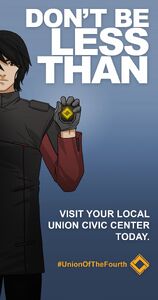 The Union logo on a missile.

Union soldiers opening fire
Add a photo to this gallery

Retrieved from "https://villains.fandom.com/wiki/The_Union_(gen:LOCK)?oldid=4246021"
Community content is available under CC-BY-SA unless otherwise noted.