The Coolest Person in the World

The Urge is a villain from the hit Cartoon Network TV series Regular Show. He appears in the episode "Trash Boat".

He is voiced by Roger Craig Smith.

He first appears on a TV interview of his band "Barracuda Deathwish". He states that the key to his fame is a name change to two completely random words. Rigby who was watching the interview became inspired by this and decided to change his name to. He decide to change his name to "Trash Boat," but quickly found out it was totally lame and decided to change it back after becoming a laughing stock but needed $50 to do it.

After many failed job attempts Rigby broke down in tears in an alley until a mysterious man appears and reveals himself as The Urge himself. He explains that after Rigby changed his name to "Trash Boat" he started to become more famous then The Urge. Eventually, his band broke up and he tried changing his name to "Urge Boat" to reclaim his fame but it didn't work. With his life ruined he decide to go back in time to stop Rigby from changing his name to "Trash Boat" by killing him. Rigby tried to reason with him about changing his name back by The Urge wouldn't listen. When Rigby got to Mordecai and told him what was happening Mordecai decided to help by using the money he was saving for when he asked Margret out.

After getting to the Court House and successfully changing his named back to Rigby. He showed it to The Urge which made him happy because now his fame was back. However, another rock star from the future named Ducan Flex killed him as revenge for The Urge robbing him of his fame. Eventually, more rock stars from the future arrived and started killing each other to regain their lost fame. They all continued battling until the entire Court House was destroyed.

The Urge later reappeared in "Exit 9B" as one of the many villains revived by Garrett Bobby Ferguson Jr., saying that he will enjoy killing Mordecai and Rigby. He is then sucked back into the portal after Thomas signed the document. 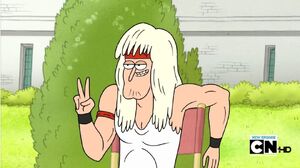 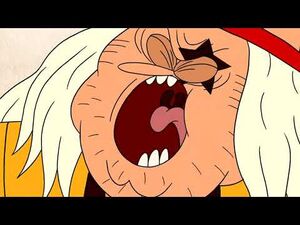 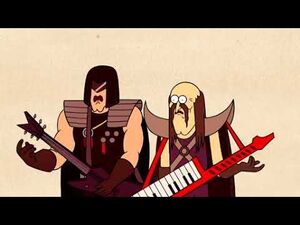