Killing everyone in the asylum except for Rudolf Wernicke.

The Walrider, also known as The Swarm, is the main antagonist of Outlast, as well as the final enemy in the game. Later it reappears sporadically through Outlast: Whistleblower. It is behind the madness that seems to infect most of the inhabitants of the asylum and is the deity of the religion of Father Martin and his followers. It is first encountered at the beginning of the Sewer level after escaping the Prison Block.

The Walrider is seen multiple times throughout the game, its presence can be seen in the Courtyard scouring the air, as well as one encounter behind the locked gate. Project Walrider was the process of exposing patients to Morphogenic Engine Therapy to create a suitable vessel for the nanite swarm, for only a person that has seen enough horror can become the host. The aim was to create the perfect host for the Walrider, so that it could become a sentient being, as is evidenced by these notes: Gods and Monsters, Variant Postmortem. It is likely that The Variants are the results of this procedure.

Billy was capable of controlling the Walrider, with his self-directed lucid dream states, however because they were only using damaged and unstable minds to experiment on, the situation got out of control. The Walrider escaped & slaughtered everyone in the lab except for one Dr. Wernicke, who was kept alive by Billy all this time. When Miles reaches the Underground Lab, Dr. Wernicke, who was thought to be dead, instructs Miles to disable the power of Billy's life-support pod to undo what he has made, to murder Billy. After Miles shuts down the life-support pod, the Walrider, now without a host, attacks Miles and fuses itself with his body, taking him as its new host. As Miles, now severely injured and barely able to walk, limps towards the exit, the door opens, revealing Dr. Wernicke and several soldiers. The soldiers open fire, but Wernicke realizes that Miles has become the new sentient host. As the screen fades to black, the Walrider can be heard attacking the soldiers as they scream in agony.

In Outlast: Whistleblower, the Walrider makes several appearances. In the Hospital, it will attack Waylon on sight in some areas. However, throughout most of the DLC, it is simply there for a visual effect and will not harm him. At the end of the DLC, the Walrider, now under Miles Upshur's control, kills Jeremy Blaire in a manner similar to how Chris Walker was killed, saving Waylon's life & allowing him to escape the asylum. At the end, the form of Miles inside of the swarm of nanites is visible from Miles' car, and moves towards the car. While starting the car and turning towards the gates, the Walrider pushes Miles' car and forces it through the locked gates.

Although the Walrider uses Miles as a host, it seems that it still has the mind and emotions of Billy. After escaping Mount Massive, the Walrider heads to Nathrop, where Billy's mother Tiffany lived. Influenced by Billy's emotions, the Walrider stated to care for Tiffany in Billy's body. Unbeknownst to both Tiffany and the Walrider, Tiffany's house was under surveillance by Murkoff, who were searching for Waylon Park.

When Tiffany, who was seeing a truck driver, was hit by the man in rage, the Walrider manifested in the trucker's truck later and murdered him gruesomely. Upon finding the bloody truck, the Murkoff Agent opened the door to find the remains of the trucker, and the Walrider. Although he was slain by the Walrider almost immediately afterwards, the agent was able to warn Murkoff about the Walrider's location.

Knowing the threat they were facing, Murkoff immediately mobilized their forces, aware that they only had that one chance to eliminate the Walrider. They surrounded Tiffany's trailer with trucks carrying some kind of siphons. However, Tiffany refused to cooperate with Murkoff who had no way of forcing the Walrider to manifest itself. However, one of the Murkoff operatives, Pauline Glick, revealed to Tiffany that she was aware that Tiffany sold her son Billy to Murkoff although he wasn't even sick. Outraged by the revelation, the Walrider manifests itself directly before Tiffany and, claiming that he had trusted and loved her, rips Tiffany apart in rage. With the Walrider fully manifested before them, Murkoff activated the siphons which, once fired against Tiffany's trailer, succeeded in destroying the body of Miles Upshur. Although Murkoff believed the Walrider to be eliminated for good, Murkoff operative Paul Marion realizes that it had merely shifted hosts once again, escaping the scene inside a swarm of ants.

The ant swarm turns up at Temple Gate after the entire cult there has committed mass suicide. While Murkoff is busy with destroying all evidence, the swarm destroys the relay tower Murkoff used to send their brainwashing signals into the valley - ending the threat the tower posed to the sanity of those subjected to its effects.

While looking ghostly in nature, the Walrider is actually a swarm of nanites; small, nanoscopic machines who possess great strength and power. It took possession of Billy Hope. As it is shown by this document, when Billy was undergoing Morphogenic Engine Therapy, he learned to self-direct the lucid dream states, he was then capable of controlling the Walrider.

As it is composed of nanites, it is almost invisible to human eyes, only showing a faint black aura. Miles can only see it clearly through the night vision on his camcorder. The Walrider has immense physical strength, and is the most physically powerful entity in the game. It can easily overpower any Variant, including the large, muscle-bound Chris Walker, as is seen in the Underground Lab when Walker is brutally murdered. When attacked by the Walrider, the result will be an instant death. The Walrider is relentless in its pursuit, while doors will slow its progress somewhat, it is capable of going underneath them. 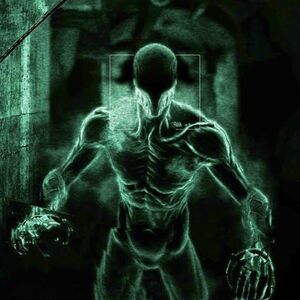 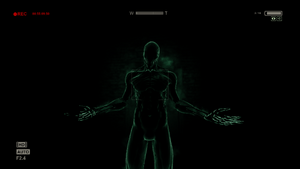 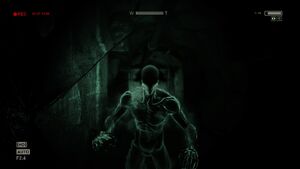 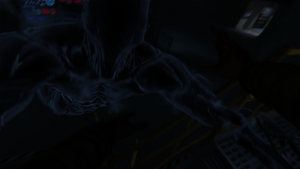 The Walrider attacking Miles after the catwalk jump. 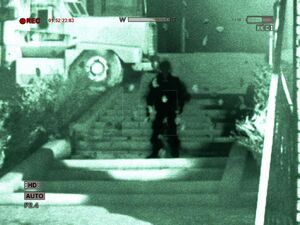 Miles as The Walrider in front of asylum 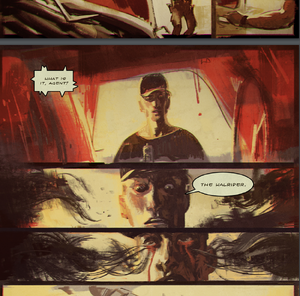 The Walrider kills a Murkoff agent. 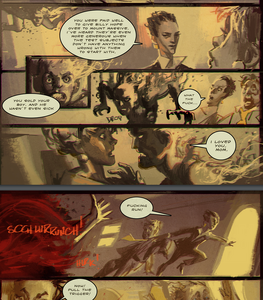 The Walrider's depiction in The Murkoff Account.
Add a photo to this gallery

Retrieved from "https://villains.fandom.com/wiki/The_Walrider?oldid=3772083"
Community content is available under CC-BY-SA unless otherwise noted.