The Walrus and the Carpenter

The Walrus and the Carpenter

Through the Looking Glass

Eat all of the oysters (the Walrus succeeded, the Carpenter failed).

The Walrus and the Carpenter are the titular main antagonists of the poem/song sequence of the same name as told by Tweedledee and Tweedledum from Disney's thirteenth full-length animated feature film Alice in Wonderland, which is based on the poem from the 1871 novel Through the Looking Glass by the late Lewis Carroll.

They were both voiced by the late J. Pat O'Malley.

When Tweedledee and Tweedledum warn Alice that her curious nature could get her in trouble, they proceed to tell her the story of poor oysters who met their demise because of their curiosity.

Though originally assumed that the duo were fictional characters, they are later seen near the end of the film in the final chase sequence when Alice tries to escape from Wonderland. In the scene, the Walrus and the Carpenter, along with several of the supposedly eaten oysters and many other characters in the film, join the reprise of the Caucus Race and they later chase Alice through a vortex leading her back to the doorway home. It is likely a case of Alice's own imagination welling up, which explains nearly all of these characters, even the ones that should have been fictional, showing up.

Once Upon a Time in Wonderland

Only the Carpenter, portrayed by John Prowse, appear in the show. Alice meet him when she finds herself inadvertently in a strange wood while she left on Cyrus's tracks, himself having released itself from the cage where he was prisoner by Jafar. However Alice becomes suddenly euphoric, insane and amnesic concerning her lover. Will Scarlett who joined her, discovers that the wood has a power hypnotizing on people which crosses it, putting them in a state close to hallucinogenic effects and transforms them literally into tree as it was the case for The Carpenter whose legs were replaced by a trunk.

The Walrus acts as the leader of the duo and is portrayed as the more evil, villainous, malevolent figure. In many ways, he is like Honest John from the 1940 film Pinocchio, as he is a manipulative and conniving character who resorts to trickery to get what he wants. He convinces a school of baby oysters to go on a "walk" with him, and takes them to a makeshift restaurant, where the greedy walrus succeeds in devouring them. While the Carpenter believes that finding employment will better improve their lives, work is the last thing on the Walrus's mind, regardless of his constant ramblings of "cabbages and kings" (his way of saying that their futures will soon enough be bright). He is also very greedy, conceited, acquisitive, and self-centered, not hesitating to eat all of the naive oysters by himself, much to the Carpenter's rage of being left out of the feast.

The Carpenter is simpler and more dimwitted, though he also wants to feed on the oysters. He almost reveals their plans once before being silenced by the Walrus. He is easily tricked into working in the kitchen while the Walrus eats all of the oysters himself. However, when he finds out that he has been deceived, he becomes extremely wrathful, destructive, obstreperous, aggressive, and violent, so he chases the Walrus with his hammer, presumably trying to kill him.

The Walrus is an obese light brown walrus with a thick tan mustache, green eyes, and a red nose. He wears a green vest, a white shirt, a turquoise blue bow tie, a blue coat, a navy blue top hat with a thick gray band, white gloves, gray pants, and brown shoes.

The Carpenter is a slender man with fair skin, red hair, and brown eyes. He wears a white cap, a sky blue shirt, a white apron, bluish-gray pants, and brown shoes.

Early render of the Walrus and the Carpenter. 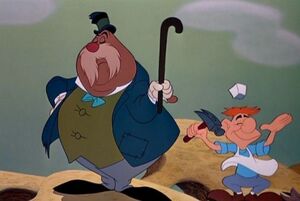 The Walrus pulling the Carpenter out of the water after initially trying to snatch the oysters. 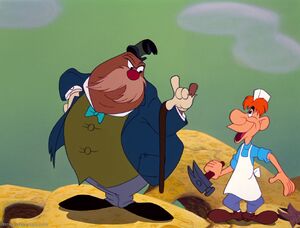 The Walrus scolding the Carpenter for trying to snatch the oysters so obviously. 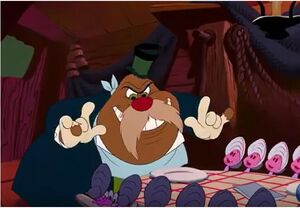 The Walrus's first evil grin as he decides which oyster(s) to eat first. 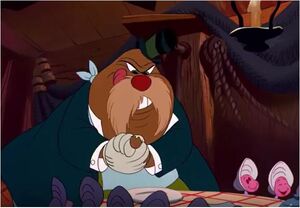 The Walrus's second evil grin as he continues deciding which oyster(s) to eat first, also licking his lips hungrily in the process, before the Carpenter interrupts him. 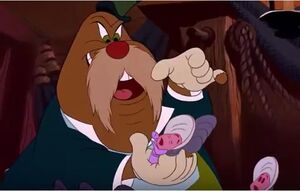 The Walrus's third evil grin as he is about to eat two of the oysters before being interrupted by the Carpenter again. 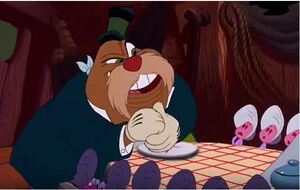 The Walrus's evil laugh as he finally reveals his true agenda to the oysters. 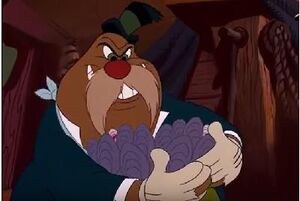 The Walrus's fourth and final evil grin as he springs his trap, now seconds away from eating the oysters. 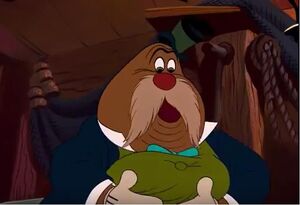 The Walrus rubbing and sloshing his full belly after devouring the oysters. 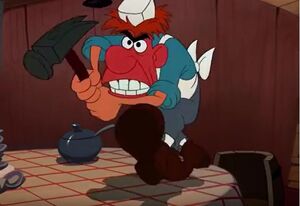 The Carpenter going into a rage upon realizing that the Walrus duped him. 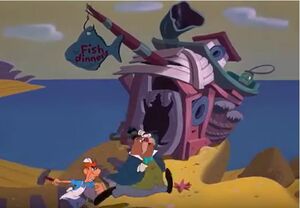 The Walrus fleeing from the angry Carpenter. 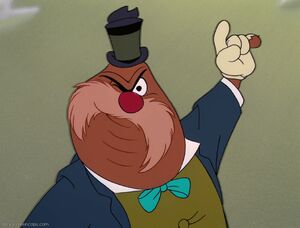 The Walrus giving an evil wink at us. 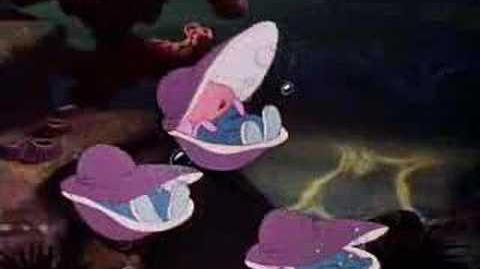 Alice in Wonderland - The Walrus and the Carpenter