Mark Davis (according to David Wain)

Oversee the production and stability of Superjail, among various other goals.

On & Off Corrupt Official

The Warden is the main protagonist of the Adult Swim series Superjail!. He built SuperJail because he believed that real jails didn't work.

The Warden demonstrates sadistic tendencies to the point of being described as a "sadistic Willy Wonka". On one supervision round with Jared, he shows utter delight at the various machines that slaughter and kills his prisoners (especially if they feature his face in some way). He's also incredibly egotistical as seen with the previous example of the weaponry bearing his facial features. Very frequently when things go awry, he will blame everyone (usually Jared) for the problems he caused.

He is mentally ill, as seen as early as the pilot episode where he pets a rabbit and kills it, only to be inspired to get bunny suits for the prisoners when he put the rabbit's carcass atop his head.

Going further in the same episode, when the Twins screwed up the prison bunny suit order so that half were bunnies and half werewolves, he relished the chaos that exploded between the prisoners dressed as either animal, which only worsened as the moon came up full and the wolf-suited prisoners became werewolves.

But other episodes demonstrate this as well, such as the time when a small cancer child (named "Sanser" by the inmates who cared for her) was accidentally taken with Jailbot. The Warden, who was going through a midlife crisis, wanted Sanser to be incinerated.

Things only got worse as the Warden developed a demonic herself who wanted to kill Sanser but was mercifully stopped by Alice (Sanser died anyway of natural causes).

Towards the end of the first season, the Warden had become influenced to make Superjail! a franchise by Jailbot bringing back a dumpster (carrying Jackknife within it) that had some thrown-out fast food burgers. Before he could do anything, he was hauled off by the Time Police who put the Warden under arrest for his crimes committed in the future.

Those crimes were thus shown as The Warden becoming an evil overlord with a massive army who had imprisoned most of the planet. His army, including an updated Jailbot, razed countless armies and ultimately, he forced the President of the United States to sign away the freedom of the world. This future was halted thanks to the Time Police and, even after all the chaos that follows, the Warden never attempted to make that almost-future a reality.

The Warden oversees Superjail! as it seems to reside in another dimension, or at the very least a difficult-to-find island. The facility is located within a volcano within a volcano and has many unusual properties such as the warping of time and space itself. The Warden is able to manipulate several of these reality-warping qualities to do things as extravagant as traveling to his office on a rainbow. He has three individuals in his employ: his accountant Jared, his security guard Alice, and his loyal robotic gofer/enforcer/hunter Jailbot. 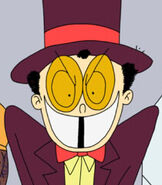 The Warden's evil grin.
Add a photo to this gallery

Retrieved from "https://villains.fandom.com/wiki/The_Warden_(Superjail)?oldid=3470996"
Community content is available under CC-BY-SA unless otherwise noted.