The Watcher in the Woods

Help Jan save Karen so it can return to its dimension (succeeded).

The Watcher is the titular main antagonist of Disney's 1980 horror film The Watcher in the Woods. It is an alien-like ghost being that came to Earth after Karen Alywood's disappearance.

An Anglo-American family, Helen and Paul Curtis and their daughters Jan and Ellie, move into a manor. Mrs. Aylwood, the owner of the residence, notices that Jan bears a striking resemblance to her daughter, Karen, who disappeared inside a chapel near the village 30 years previously. Jan begins to see strange blue lights in the woods, triangles and glowing objects. Eventually, Ellie goes to buy a puppy she names Nerak (an anagram of "Karen"). After seeing the reflection of the name "Nerak" ("Karen" spelled backwards), Jan finds out about the mystery of Mrs. Aylwood's missing daughter. Several strange occurrences appear, beginning with Mrs. Aylwood saving Jan after she falls into a pond looking at a blue circle, and ending with Jan finding a man named John, who explains that Karen did disappear, but has not died. He tells her that in a seance-like ceremony, Karen disappeared after lightning struck the tower and a bell fell on top of her. They find out that the disappearance of Karen is linked to a solar eclipse. Jan figures out she needs to repeat the sequence through the strange possession of Ellie. In the chapel, something possesses Ellie and explains the accidental switch that took place 30 years ago. Ellie explains that Karen was taken to another dimension, while an alien-like being, the Watcher, came to earth. The Watcher then appears independently as a pillar of light, fueled by the "circle of friendship". It engulfs Jan and lifts her into the air, but Jan's friend Mike Fleming intercedes and pulls her away before the Watcher disappears. At the same time, the eclipse ends and Karen, still the same age as when she disappeared, reappears – still blindfolded. She removes the blindfold as her mother enters the chapel. 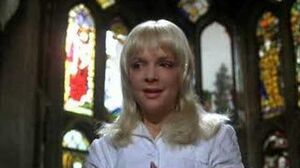 Watcher in the Woods-- Alternate Ending