The Wind In The Willows

The Weasels are the main antagonists of the popular story "The Wind In The Willows" as well as its numerous film adaptations - they are portrayed as malicious, criminal and slightly feral weasels with a habit of causing trouble for the other animals of the story, who live more peaceful lives.

In many ways, the Weasels parallel a gang of cutthroats and resided in the Wild Woods, though they made plans to take control of Toad Hall.

The Weasel's song "Secret of Survival" from the 1996 live action movie is a not very famous, but very strange song. In this movie, they look like more than tailed men witch sunglasses, suits and mustaches. In this version, they plan to build a dog food factory to kill the protaginists. When they betray their leader, the weasel chief, by giving him an exploding bomb, they start to fight about who is in charge now. The mole, the rat, the badger and "Mr. Toad" escape from the machines and defeat the fighting weasels. Meanwhile, the believed dead weasel chef escapes, trying to destroy Toad Hall with an explosion. Toad can't stop him, but instead of his house, the dog food factory explodes. It is shown that the badger, the rat and the mole survived and the rat explains that he switched the signs on the tons "bones" and "dynamite", so the weasel chef put the explosion into the dog food factory, probably killing himself along with all the other weasels. 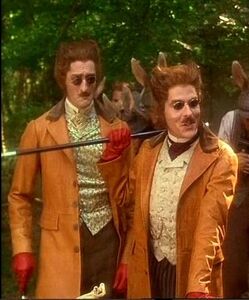 The Weasels as seen in Mr. Toad's Wild Ride.

Mr. Weasel (the leader of The Weasels) as seen in the 1980's stop-motion adaptation of The Wind in the Willows.

As seen in the Adventures of Ichabod and Mr. Toad.

As seen in the Rankin Bass version of Wind in the Willows.
Add a photo to this gallery

Retrieved from "https://villains.fandom.com/wiki/The_Weasels?oldid=4008292"
Community content is available under CC-BY-SA unless otherwise noted.