Commerce Building in the Flooded District

Assassins
The Whalers is the main antagonistic faction in the videogame Dishonored. They are a group of assassins led by Daud.

After arriving at Dunwall, Daud became an assassin and formed the Whalers, recruiting street urchins, mercanaries and refugees. They took over the former Chamber of Commerce in the Flooded District and used it as a base of operation. They also found industrial gas masks normally used in whale oil processing plants. They used the masks to protect themselves from the plague and to conceal their identities.

Trained by Daud, who shared with them some of his powers including Blink, the ability to pull an object or target towards the caster, and an immunity to toxins, they were then sent to perform assassinations. One recurring employer of the Whalers was Hiram Burrows, the Royal Spymaster of Dunwall. Burrows eventually recruited Daud to kill Empress Jessamine Kaldwin and to kidnap her daughter Emily.

Daud infiltrated Dunwall Tower, where Jessamine and Emily were meeting with Corvo Attano. Daud watched as two of his Whalers attacked the group. Corvo managed to fend off the two assassins, promting Daud and another Whaler to attack. While the Whaler fended off Corvo, Daud murdered Empress Jessamine. Daud and the Whaler then fled with Emily and left Corvo to take the blame.

While infiltrating the headquarter of the Order of the Everyman, Corvo can enter an interrogation room and listen to a recording. He finds out that one of Daud's whalers has been captured by the Overseers but he ends his life with a hidden poison needle before the Overseers can torture him.

Corvo can find three assassins patrolling the area around Clavering Boulevard on his way to the Pendleton twins.

More Whalers are encountered after Corvo has been betrayed by the Loyalists and has been left in the Flooded District. Two Whalers find the unconscious Corvo drifting on a boat and bring him to the Greaves Refinery where Corvo meets Daud. Daud tosses Corvo's weapons down into the refinery and has him knocked out by a whaler and imprisons Corvo at a makeshift base at the Rushore Waterfront. Corvo escapes and tries to get back to the Hound Pits Pub in order to get revenge on the Loyalists. In order to do so, Corvo has to infiltrate the Building of Commerce as Daud has the key to the sewers.

Inside and around the building Corvo encounters more of the Whalers who have been tasked by Daud to watch for intruders. Corvo can choose whether to kill them or to avoid them. After confronting Daud, Corvo leaves the Flooded Districts and will encounter no more Whalers. 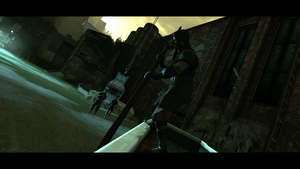 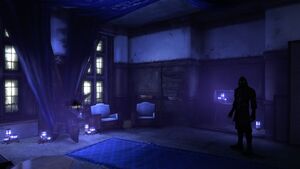 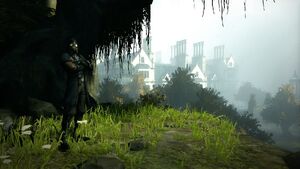 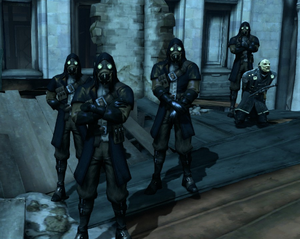