Villains Wiki
Register
Don't have an account?
Sign In
in: Articles under construction, Powerpuff Girls Villains, Cartoon Villains,
and 18 more

The White Lie is a minor antagonist in Powerpuff Girls, appearing in the episode "Lying around the House". He grows when a lie is told in a certain household, and shrinks when whoever lies tells the truth. In fact, he represents the lies.

The White Lie loves lies and hates the truth. He does his best to keep lies going.

The White Lie takes his design from a white humanoid figure with a small stature, which makes him physically weak and hinders his abilities. However, he can be augmented in size whenever people tell lies in his vicinity.

When the Powerpuff Girls are called down for breakfast by the Professor, they get liver and onions, while the Professor gets a stack of pancakes. When the Professor, having not shaved, looks into a newspaper at an ad of a game show, Bubbles, thinking that it meant it was Saturday, and that he could spend the whole day playing with us, and he tells them not today and that he has a lot of work to do. This causes a small white creature to appear. The Professor, about to scrape his pancakes into the sink, orders the girls to eat their breakfast, claiming he went through a lot of trouble preparing the meal for them and telling them that he didn't want to see it go to waste. The girls also find out the Professor was just using a TV dinner. Later, the girls, without the Professor's knowledge of this, feed their liver and onions to a pack of stray dogs. They let him believe they finished their breakfast, causing the creature to get even bigger.

Later, he just keeps growing and growing when the girls lie after Bubbles (accidentally) colors on the wall and tries to hide it with a plant, Buttercup breaks the Professor's Major Brain award, Blossom overloads the washing machine by adding all of her own, her sisters' and the Professor's clothes and adding a whole box of soap to it, then Blossom's hair clogs the tub drain, Buttercup drinks from a jug of chocolate milk, and Bubbles messes with the Professor's potions, until finally, the monster grows into a scary monster that causes lots of trouble. When Blossom decides to tell the truth, she begins by confessing to having eaten Buttercup's chocolate bar. This causes the monster to shrink a bit, much to Buttercup's anger for finding out it was her. Blossom apologizes and promises her a new one. She brings the monster with her outside where the Professor is. The girls (at first except Buttercup, who then gives in) confess their lies. When the Professor tells them to keep it down because he is working in there, the monster begins growing again. That's where the girls find out he is lying and instead, watching a game show. They unplug the TV and interrogate him, and Blossom exposes the white lie to him. When Bubbles goads him into telling the truth, the Professor admits that he didn't have a lot of work to do, that he didn't slave away on the hot stove making their breakfast, and that he left the toilet seat up (the latter being much to the girls' confusion, as Buttercup saying she did the same thing caused the monster to shrink). Finally, the monster vanishes.

Finally, the mayor informs to the Professor that the white lie has now grown to a monstrous size, and is now attacking Townsville, due to a few promised he made, during his re-election speech. 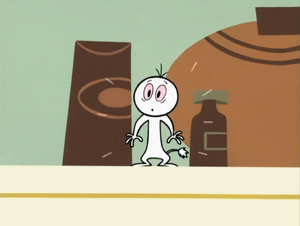 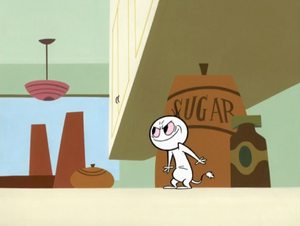 The White Lie growing in size. 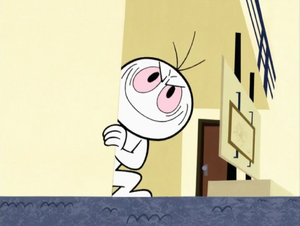 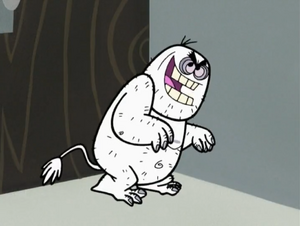 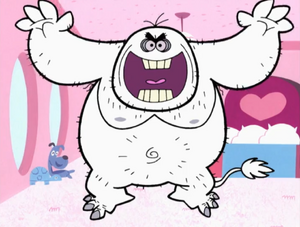 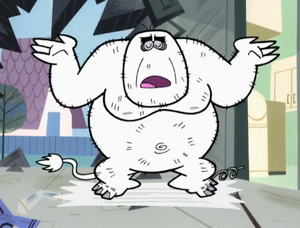 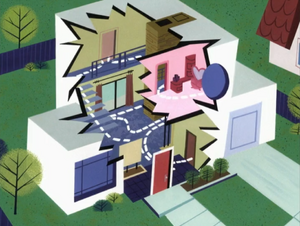 The White Lie leaving a trail of destruction. 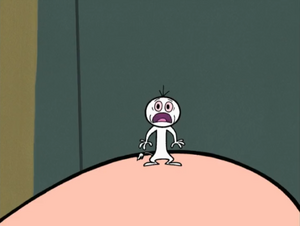 The White Lie on the verge of defeat. 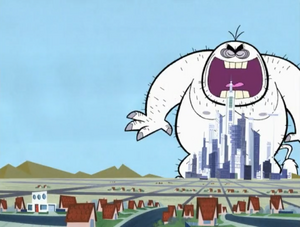 The White Lie at maximum size.