The Lair of the White Worm

Escape from its prison and bring destruction to the world.

The White Worm is the titular primary antagonist in the 1988 movie The Lair of the White Worm, based on the book of the same name by Bram Stoker. It is a snake-like dragon trapped in a deep cavern.

In the book of the same name by Bram Stoker, the titular White Worm has taken the form of a noblewoman named Lady Arabella March. Adam Salton came to live with his cousin and he quickly learned of the legend of the Worm. Shortly after meeting Lady Arabella, Adam is suspicious that she is a primordial Worm, especially since she viciously kills a snake-hunting mongoose.

Adam's cousin, Edgar Caswill, is obsessed with mesmerism, wishing to become an all-powerful god and control the district, Lady Arabella is aiding him to conquer so she can get everyone hypnotized as easy and complacent prey.

Adam finds more evidence that the Lady is a Worm when she quarrels with slave Oolanga and then he turns up dead; devoured by the Worm.

Edgar is hunting two sisters; Lila and Mimi. Lila is thus the weakest, and she is soon killed by Edgar's magic, with the Lady's help. Mimi weds Adam and Lady Arabella pursues them in her serpent form, but loses them in the ocean. She returns to her lair to brood and plot revenge.

With help from a knight, Sir Nathaniel, Adam finds dynamite to destroy the Worm's pit, which is coincidentally in Lady Arabella's mansion. He readies himself to destroy the monster, and gets his chance when Lady Arabella is destroyed during a massive lightning storm; causing her corpse to transform into the White Worm.

Centuries ago John D'Ampton slayed a giant snake-like demon that was menacing a small town in England. It is now present day and a local archaeologist Angus Flint excavates a skull that was part of the worm. The skull is excavated on the property of James D'Ampton, a descendant of John D'Ampton. The property is home to two orphaned girls named Mary and Eve Trent, whose parents disappeared without a trace.

Lady Sylvia Marsh, a neighbor to the Trent family, recently arrived back at her home. Sylvia steals the excavated skull from the Trent home. There is more to Sylvia than meets the eye; she is part of an ancient cult that worships the worm as a god and believes the worm is still alive, but is trapped somewhere inside of a local cavern. The followers of this cult are part snake and part vampire. They spit poisonous venom and are capable of paralyzing or transforming their victims after a lethal bite which injects the poisonous venom.

Sylvia plans on using the skull, along with a virgin sacrifice, to free the creature from its imprisonment. When Eve disappears, James, Mary, and Angus must find her before she sacrifices Eve.

When the worm saw Eve it started crawling in the hole of the cavern to eat her. Sylvia almost cut the rope that was holding Eve but Angus pushed Sylvia down the cavern right into the worm's jaws. He rescued Eve but the snake almost reached the surface. To stop it, James threw a grenade into its mouth, blowing the ancient demon to pieces. 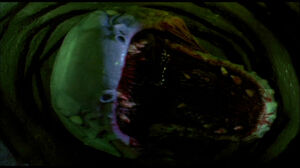 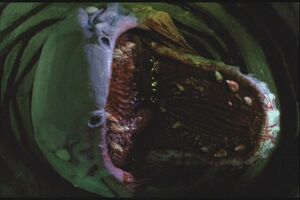 The Worm waiting beneath the cavern for its next sacrifice

Add a photo to this gallery
Retrieved from "https://villains.fandom.com/wiki/The_White_Worm?oldid=3781191"
Community content is available under CC-BY-SA unless otherwise noted.