Controlling Azkadellia as an evil ruler and using her for her crimes.

To conquer OZ and envelop it in total darkness by blocking out the sun for all eternity.

The Wicked Witch, also known as the Evil Witch of the Dark and the Witch of the Dark, is the main antagonist of the 2007 Sci-Fi Channel miniseries Tin Man. This hideous and mysterious, demonic-500 year-old sorceress whose life and history is somewhat shrouded in mystery, is behind all the terrible actions and cruel deeds committed by Azkadellia whom she also possessed in her own plans of ruling not only the O.Z. (Outer Zone), but all the other worlds beyond its boundaries.

She was portrayed by Karin Konoval, and by Kathleen Robertson/Alexia Fast, while possessing Azkadellia, in respectively her adult and young self.

The Witch's life before her imprisonment, was almost entirely unknown, though according the writings on the walls of cave she was trapped in, says she was a denizen of the O.Z. who practiced black magic and caused much terror and chaos upon many others before she was sealed away 5 centuries ago.

Many years later, when they were little children, DG and Azkadella were playing in the woods outside the magical lake of Faniqua and found a cave with a face-like opening inside they heard cries of a little girl. When they used their power to open the seal and saw the child. Before they tried to bring back help, the little black-haired girl in a blue dress revealed herself to a demonic entity in her natural form of an old hag in a black dress who is referred to as "The Evil Witch of the Dark". It is unclear whether this witch is related to the original Wicked Witch of the West as a descendant, but an ancient inscription in the cave refers to "light conquering darkness", and the old woman says to the girls when they find her that she has been waiting there for many years. She also later makes references to, "waiting almost 500 years," and other sayings to further suggest she is the same witch.

The most common speculation is that since Dorothy Gale does in fact turn out to be the ancestor of DG and Azkadellia (the main antagonist), then the Witch who lost to Dorothy was sealed away and has returned to once again try and conquer Oz, or the OZ (Outer Zone) as it is referred to here.

The witch is exorcised from Azkadellia and melted by the destruction of a machine inside Azkadellia's tower she is using along with the magic of the Emerald of the Eclipse wrested from her grasp, in her failed plan to bring eternal darkness over the Outer Zone. 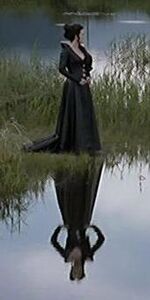 The Evil Witch possessing Azkadellia as the main antagonist. 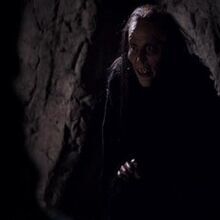