God
God of Honkai
The Truth Itself
Lord

Supreme God of the Houkai

Erase all sapient life forms in all universes.

Keep all civilizations as primitive living beings. (both ongoing)

The Will of Honkai, also known as the Honkai God, God of Honkai or simply as God, is a mysterious entity in the universe of Honkaiverse that serves as the Supreme God, creator and leader of all Houkai's forces of nature in reality and beyond all creation itself, serving as the titular overarching antagonist of the Honkaiverse and all its related works as a whole. Hints given in Second Eruption manhua implies that the Will of Honkai was first introduced as a character solely for Honkai Impact 3rd but their overall influence in other realities as well implies that every universe where the Honkai exist show that they are related to everything that is happening in the original universe and in countless other universes.

They are a mysterious entity Sirin, the Herrscher of the Void, meets in the destroyed ruins on the dark side of the moon and grants her four additional Herrscher Cores (more known as Gem of Conquest (Thunder), Gem of Haste (Fire), Gem of Serenity (Death) and Gem of Desire (Wind)) to empower her and send her on a mission to eradicate mankind through the Second Honkai Eruption in 2000 CE, an attempt to erradicate the second humanity of the Current Era that was built by the survivors who managed to escape from Herrscher of the End more than 52,000 years ago. The God of Honkai is an entity unknown to all people with rare exceptions like Otto Apocalypse, Sirin and the Herrscher of the Void (and probably other Herrschers as well since they were created by their own hands) and billions are not even aware the WIll of Honkai is actually a God instead of primitive force of nature that was probably born with the creation itself.

It seems to be the primordial driving force behind all Honkai forces (from the beasts, to Herrschers and even natural disasters), and considers the Herrschers to be their "children" as well their own disciples, or even "prophets". More than 52,000 years ago, Dr. MEI from Fire Moth once theorized that it is the great gestalt will of the Honkai and appropriately named it the "Will of Honkai" but never confirmed if it was a material force, sentient force of nature or even a God.

As a God, the Will of Honkai don't have a specific form that can be understand by mortals or even Herrschers, therefore they need to adopt a physical form to be seen by mortals. The Will of Honkai is shown to appear differently to each individual, being a blank version of themselves. To all characters who encounter the God appears as a white featureless humanoid shaped like themselves.

Not much is known about what the Will of Honkai is and what their purposes are besides the very concept of why the Honkai exist but it was shown to be rather cunning and wise enough to guide people to what they desire the most. Despite Otto Apocalypse was a human they were supposed to destroy, the God of Honkai gave him a "clear" answer of how he can reunite with his love interest [Kallen Kaslana] once more; their answer was in death as shown when they assumed the form of Otto and committed suicide, something Otto could not understand.

The God always does what it believes is fair in trade to those who wish to become more powerful once they suffered enough to the point of hating humanity as a whole, giving them power to commit genocide in exchange of obeying them until their mission is complete. The Will of Honkai shows no favorites of victims and no mercy or exceptions and deals with "absolutes", always doing what they believe to be right; once Gods are never wrong.

As the God of Honkai, it is believed they hate and despises all intelligent life forms as a whole. And while being considered a wise being, the God is not above sadistically showing the sins humans committed just to make them suffer before them as shown when they showed all of Otto's sins despite begging for their knowledge on his knees. They were also capable of smilling, if it is a smile of sadism, happiness or arrogance, it's unknown. As such, the WIll of Honkai seems to consider humans nothing more than insects and share the same view of how much humans see insects as insignificant life forms that deserve no attention and little regard for their lives, memories and wishes.

The origins of the Will of Honkai are unknown even to Dr. MEI who investigated the omnipotent evil force for years, never coming to a concrete conclusion of what exactly is. It's implied that like all life itself, they were born alongside all creation with the solo purpose of preventing civilizations from rising too much intelligent and keeping them isolated as primitives beings. According to how a civilization rises and advance their technology and intelligence, the Honkai forces created by the Will of Honkai adapt itself to its "prey" and seek to destroy them to fulfill God's desires.

By their own design, the Honkai are not actually physical threats but a supernatural phenomenon that manifests itself in many ways, including infectious diseases, plagues (and even digital viruses), infected humans (zombies), natural disasters (such as sentient tornados, tsunamis etc), Honkai beasts, and its primary form; the Herrschers, humans with superpowers that defy physical laws.

52,000 years after the Herrscher of the End wiped out mankind from Earth, the Houkai God was able to contact Sirin and the Herrscher of the Void who were born in the Current Era in 2000 D.C. The Houkai God contact the two and ordered them to come to the moon soon after Sirin escaped from Schicksal's Babylon Tower to give them the power they needed to destroy the world. Arriving on the moon, Sirin enters a massive structure on the moon built 50,000 years ago by the Mei from the ancient Earth. Once she entered the temple, the Honkai God approached her and showed images of everything that happened to her in the past. Once Sirin came to the conclusion that God was trying to kill human race for their insolence, Sirin immediately claimed to be her prophet and asked to give of all her powers to her so she can make humanity pay for taking everything from her.

Gifted with the power of Herrscher of Conquest, Herrscher of Silence, Herrscher of Desire and Herrscher of Pestilence, Sirin did not waste time and used her new powers by throwing debris of the moon on Earth, randomly destroying entire countries in a blink of an eye, causing 5km tsunamis all across the Pacific and Atlantic oceans that wiped half of Europe, Asia and America, causing massive explosions of heat that melted everything in 5,000+ km, devastating thousands of towns, creating earthquakes that brought entire states to the oceans and killing a large portion of mankind on the process.

From this point on, the Second Houkai War was started and Sirin alongside the Herrscher of the Void took the lives of billions for the next few days.

Days later, Schicksal strikes the tower again, but this time, Otto and his elite squad are present and teleport themselves directly to Sirin at the top of the tower. The battle between Sirin and Otto's squad starts with her disadvantage as she was facing two of the strongest Valkyries of Schicksal. Using powerful punches, Fu Hua puts Sirin in a state of fear after she fell from her tower with a single punch. While she was recovering from her punch, Fu Hua delivers the final blow by impaling Sirin with an ancient ice sword. However, it turns out Sirin was left in a comatose state, allowing Otto to invade her mind and see what was going on inside of her conscience.

While inside of her mind, Otto manipulated memories and tried to create a "paradise" for her by reviving her mother and giving her a chance to begin again by saying he would revive her mother if she allowed him to speak with her "God". But at the same time, he taunts her saying her mother will never accept her again because of all her brutality, crimes and atrocities she did in the name of her revenge. This was enough to push Sirin to despair and created a wormhole between her mind and the empty dimension of God's fragment. There, Otto begs to God to revive his long-lost lover, Kallen Kaslana, back to life after hundreds years trying to do what was the best for his loved one. However, the Honkai God takes over his form and commits "suicide", basically saying the only way to see his love again was to kill himself and meet her in death. This caused Otto Apocalypse to scream in horror and was immediately banished from Sirin's mind.

Much later, the Houkai God was seen seated inside in her throne inside of Sirin's mind when Fu Hua used her Taixu Sword to strike down Sirin, who was currently fighting with Fu Hua in the real world. When the sword broke through Sirin's barriers, the flames almost hit the Houkai God but the entity smiled maliciously and denied the attack, wiping it out of the existence.

That was the last known appearance of the Houkai God since even Sirin wasn't able to communicate with the deity anymore. Their whereabouts are unknown much like their disciple from the Previous Era, Herrscher of the End but it is more than confirmed they are alive and still commanding the Honkai forces in Earth and in other universes. 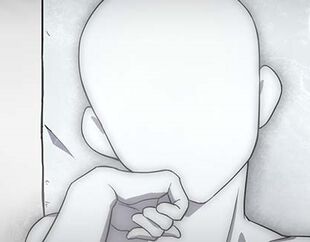 God in their blank form. 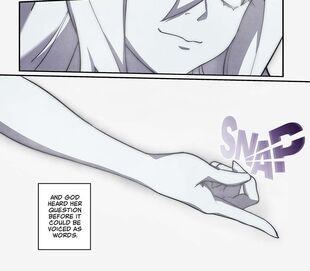 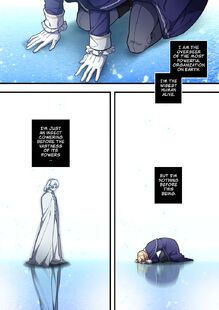 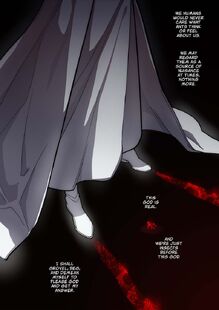 Otto describing God in his own thoughts.