Return to her missing mother (ongoing).

She is an assassin and a member of the Imperfects who also made a deal with Niles Van Roekel for her safety and presumably help her find her missing mother.

Benedetta was born and grew up in a young Italian magician family, Aldo and Corzaon Gaetani. During her childhood, Benedetta suffered from her mother's attention, who was disappointed with her shy and gawky personality. When her mother, Corazon mysteriously disappeared, Benedetta grown to be a beautiful young woman, even more, beautiful than her missing mother.

After Corazon's disappearance, Benedetta's father, Aldo started drinking and gambling. One day, Aldo took Benedetta on a tour throughout Italy and became his new assistant. Aldo became a superlative illusionist and famous for his trick, "The Disappearance." This trick made Benedetta made her mysteriously disappear on stage and randomly appear in a seat with the audience.

As being the best illusionist that ever lived, others said that his trick was mystic and miracles. This led Aldo to believe that his trick was real. However, he owned a lot of money to the wrong people. Blinded by his own fame and ignoring the threats from the people he couldn't pay, thugs came and poured chemical onto Benedetta's face, leaving her scarred and entered Aldo's dressing room and killed him. As the thugs attempted to kill Benedetta, she vanished into thin air from them.

Once rumors started to spread, Niles Van Roekel took notice of this and headed to Spain, where Benedetta worked was a fortune teller. Needed safety from her attackers, Roekel promised to protect her and the possibility of finding her mother. Roekel fused a particle reactor inside of Benedetta's right thigh that allowed her to control every molecule in her entire body. Now being able to use the 5th dimension, she can now phase and teleport short distances and never be captured. In hopes of finding her mother, she fights that chance. Furthermore, The Wink was born.

During the invasion, The Wink was sent to the Avengers Mansion and retrieve data from the supercomputer, but encounters Wolverine and loses to him, failed to retrieve the data. She later encounters and defeats Elektra, who was with Iron Man and other survivors from the alien attack as they raided through Roekel's headquarters to rescue the heroes that were taken as test subjects for Roekel's experiments. The whereabouts of The Wink remains unknown. 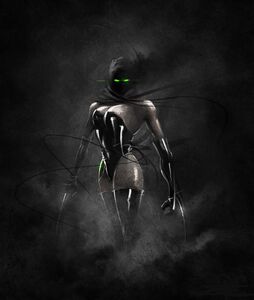 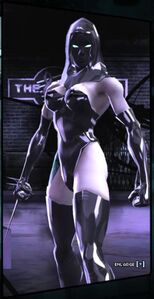 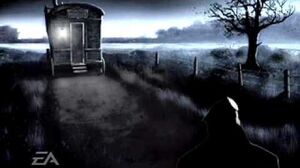