Villains Wiki
Register
Don't have an account?
Sign In
Advertisement
in: Energy Beings, Aliens, Doctor Who Villains,
and 26 more

The Wire is the main antagonist of the Doctor Who episode "The Idiot's Lantern". It was an alien criminal that menaced the population of England in 1953 for a few days before and during the coronation of Queen Elizabeth II.

It was portrayed by Maureen Lipman.

The Wire led a gang that could transform themselves into plasmic energy. After capture, The Wire was sentenced to death and executed by its people. It survived, though, and preserved itself as an energy being and escaped to Earth.

It concealed itself in television signals, transferring itself from set to set. It fed off the mental signals of human brains, paralyzing them and sucking out their energy with electrical tendrils. This process left the victims mindless and faceless. The victim's consciousness was retained intact, as seen when The Wire showed the Doctor a sampling of its victims on the televisions in Magpie's shop. The Wire used the image of a female BBC continuity announcer to communicate with the outside world. It hoped to use this energy to manifest itself in corporeal form once more.

The Wire stole the face of Mr. Magpie, who owned an electrical shop, and gave it back to him, giving him plans for then-future technologies (such as a portable television small enough to carry in one hand) and promised him freedom after the completion of its simple two-phase plan: First, have Magpie sell cheap television sets all over North London so it could feed. Second, have Magpie connect the Wire (inside the portable television) to the television transmission tower at Alexandra Palace on Queen Elizabeth II's coronation day, June 2, 1953. Connected to the tower, the Wire would both transmit itself to the estimated three million viewers watching in the vicinity and transmit back energy it would use to reconstitute its corporeal body.

The Tenth Doctor trapped the Wire on a Betamax tape using a homemade video recorder. The Wire's victims were restored to their normal selves. The Doctor seemed confident that the Wire would remain trapped, but said that he would tape over it, just to be safe. 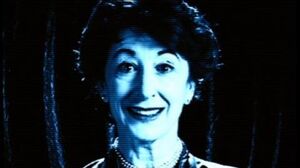 The Wire Is HUNGRY! - The Idiot's Lantern - Doctor Who - BBC
The Wire is revealed. 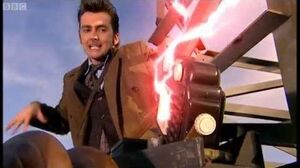 End Of Transmission - The Idiots Lantern - Doctor Who - BBC
The Wire's defeat.