The Witch, also called Evil Lady, is the main antagonist of the 2 Stupid Dogs episode "Red Strikes Back".

She was voiced by Billy West.

The episode begins with the two nameless dogs reuniting with Red, who is a parody of Little Red Riding Hood. She convinces them to follow her to her Grandmother's house by promising them canned cheese.

Instead of Red's Grandmother's house, they instead wind up at a gingerbread house, and it is there that they meet the Witch from the Hansel and Gretel fairytale. She allows them to come into her house, and she puts Red in a cage, fully intending to eat her.

She then commands the two dogs to fatten Red up so that she could devour her later on. They begrudgingly obey her, and they give Red all the food in the house. Red is fattened up, and the Witch declared that it was "dinnertime".

She then uses her whip to lift Red off of the ground, and she transformed herself into a giant frog, and catches Red in her mouth, swallowing her trapping her in her belly with a burp. She then stated that she was still hungry, and she turned her attention to the dogs.

The two dogs beg the witch to spare them, citing that they only followed Red because she had promised them canned cheese. The Witch presented them with the canned cheese, and sprays the cheese over their heads.  She then devours them (though whether she does so in her real body or as another animal is unknown), and the episode ends with a snapshot of the two dogs and Red sitting in the Witch's stomach. 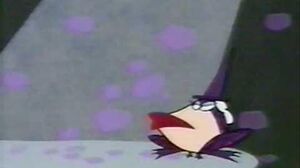