Turn everyone into frogs (failed).

The Witch is the main antagonist of the 2012 Bubble Guppies episode Bubble Puppy's Fin-tastic Fairytale. She was an evil witch who describes herself as the meanest one in the world and wants to use her Mean Green Bubble Potion to turn everyone in the world into frogs.

She was voiced by Wanda Sykes.

In Bubble Puppy's Fin-tastic Fairytale, She was first seen in the enchanted forest talking to her mirror (Nonny) about who's the meanest person in the forest. She then says she'll use her Mean Green Bubble Potion on Bubble Puppy. The mirror points out that he's only a puppy but she doesn't care. She said then uses her potion on Bubble Puppy turning him into a frog and flies away on her broom.

Later on in her castle, she plans to make more of her potion and orders her crab scientists to do so. She then notices the mirror is sad and asks him why. He states he feels bad for the puppy being turned into a frog. The Witch then leaves, unaware that the mirror was going to betray her by helping Molly and Gill.

The Witch then reappears after Molly, Gill, Little Red Riding Hood (Oona) and Goldilocks (Deema) collect the porridge from The Three Bears. She tells her scientists how's it going and reveals her plan, as se plans to turn everyone in the whole world into frogs with her potion and sing a song about how mean she is. She then states that when the potion is ready, it'll be loaded into a rocket and after a countdown, the potion will fly into outer space where it will make millions of bubbles of the green potion float down to earth and will turn everyone into frogs. Molly and Gil rocket into the sky while The Witch goes to stop them herself on her magic broomstick. Molly and Gil open the hatch of the rocketship and drop a magical egg into the potion which turns it pink and undoes The Witch's spells. The Witch tries to use her green potion to turn them into frogs once more but Bubble Puppy blows the bubble on The Witch which turns her into a frog. The Witch then tells them she is happier as a frog and thanks them before hopping away.

The Witch is a wicked and evil witch who wanted to turn everyone into frogs by using her green potion.

The Witch is a witch with green skin, a black hat, a black shirt, and orange hair.

The Witch using her wand.

The Witch on her broom.

The Witch dancing to her song. 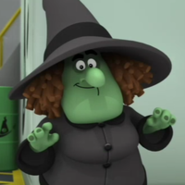