Limited skill in manipulating children to gain their trust
Trickery

Luring children into her home.

The Witch is the main antagonist in the fairytale of Hansel & Gretel (though in some versions, she is known as the Gingerbread Hag and in Engelbert Humperdink's 1892 opera she is called Rosina Leckermaul, the German translation of the name being "Raisin Sweet-tooth"). She is portrayed as an evil and cannibalistic witch who resides in a home made out of gingerbread and other assorted sweets, which she uses to lure the two protagonists into her home with the intention of eating them. She is one of folklore's best known characters, and the idea of a gingerbread house and witch has been recycled countless times in many movies, cartoons and comic books.

Hansel and Gretel were two unfortunate children who had been abandoned in the forest by their father on the request of their wicked stepmother. Despite Hansel's clever attempt to find his way home using bread crumbs, the two children end up lost in the forest due to birds eating the aforementioned trail.

Lost and hungry, the two children stumble across a house made of gingerbread and decorated with all manner of sweets. Unable to contain themselves the two children begin to eat the house only to find out it is occupied by an evil witch who proceeds to lock Hansel in a cage while forcing Gretel to do housework - all the while the witch feeds Hansel food to fatten him up in preparation for roasting in an oven: however as the witch tends to the oven Gretel manages to sneak up behind her and tosses her into the oven - padlocking it behind her and killing the witch.

Hansel and Gretel proceeded to stay at the now deceased witch's home for a couple of days, getting food and finding a few valuable gold coins, which they used to "live happily ever after".

The likely moral of this fairytale is to be wary of strangers. In many ways, it was the first "don't take candy from strangers" type tale - though in sad reality the story was likely not so much designed as a moral one, but rather a reflection on the fact that in medieval times, many families were forced to abandon their children during times of famine. This is reflected in the fact that the original fairytale had no stepmother in it, but rather had the children's true mother convince her husband to abandon her children so they could be adopted by someone who could give them a better life. 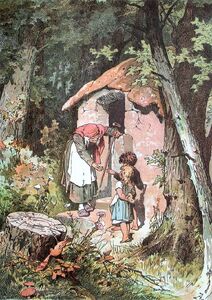 The Witch meeting Hansel and Gretel. 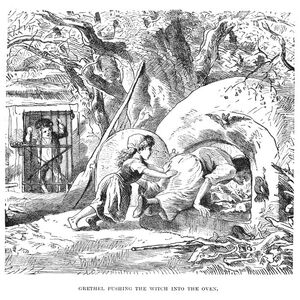 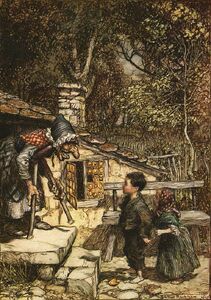 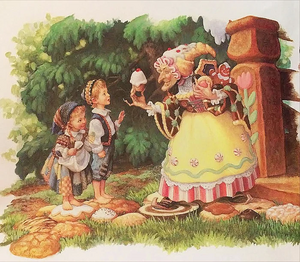 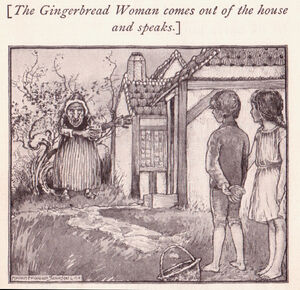